Tourism Secretary Teo is looking for a co-host for Steve Harvey. 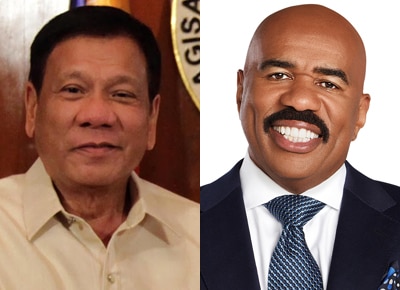 Department of Tourism secretary Wanda Teo revealed in a recent press conference that President Rodrigo Duterte wants to talk to the Miss Universe Organization regarding an important detail.

Teo shared hat the president does not want American host Steve Harvey to host Miss Universe 2017, which would in the country next year.

“Actually under contract siya (Harvey) for five years, I believe. Definitely he’s again going to host the Miss Universe. When I told the President about that, medyo negative agad ang sabi niya. ‘Hindi puwede,’ that was what he said,” she started.

“And he said, ‘I’m going to talk to the Miss Universe na dapat hindi siya.’ That’s my problem,” she continued.

To resolve the issue, Teo is considering the idea of tapping a co-host for Harvey.

In an attempt to appease the President, Teo said she would suggest to the Miss Universe organization for Harvey to have a Filipino co-host.

“Siguro that’s what I‘m going to do para hindi talaga magagalit ang Presidente. Siguro maglalagay ako ng ng girl from the Philippines who will co-host, she said. “Wala pa [kaming naiisip], probably one from the media.”

Philippine representative to the 2017 Miss Universe pageant Maxine Medina earlier expressed excitement upon learning the fact that Harvey is returning as the host of the prestigious pageant.

Meanwhile, Teo confirmed that the Miss Universe pageant would be held at the Mall of Asia Arena on January 30, 2017.

To lessen whatever traffic the event might cause, Teo shared that they have opted to transfer the other key activities in other provinces such as Davao, Cebu, Iloilo, and Vigan.

“The main events na lang will be in Manila and it will be at the MOA Arena. The pre-pageants will be in the hotels somewhere in that area also,” she said.

In parting, Teo confirmed the earlier announcement of former Ilocos Sur Governor Chavit Singson that he and his team are shouldering half of the pageant’s expenses.

“I am 100% sure that the government is not going to spend any money for the Miss Universe,” Teo ended.