Jodi Sta. Maria got an I-Emmys nomination for her role in the remake of Pangako Sa’yo 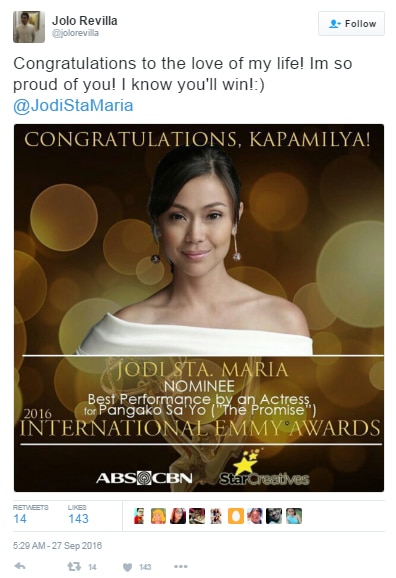 Cavite Vice Governor Jolo Revilla couldn’t hide his pride for actress Jodi Sta. Maria after she got a nomination from this year’s International Emmy Awards in the Best Actress category for her role in the remake of Pangako Sa’yo.

“Congratulations to the love of my life! Im so proud of you! I know you'll win!” he posted on his Twitter account.

Netizens wondered about Jolo’s ‘term of endearment’ for Jodi after they confirmed last June that they have already split up.

Jolo and Jodi admitted they are in a relationship in 2012 after her separation from Pampi Lacson in 2010.