Lea Salonga on a reunion movie with Aga Muhlach: ‘It will happen when it happens’

Lea Salonga talks about engaging with fans on social media. 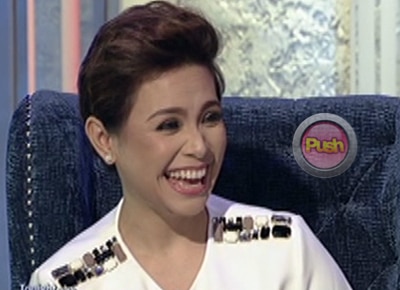 On Tonight with Boy Abunda, one of the coaches of The Voice Philippines, Lea Salonga, talked about interacting with her fans on social media.

“I think it’s a gut feel thing. When I feel like, okay, I can engage with this person, parang I feel like this will be a very fruitful exchange and it turns into a conversation – it takes discernment. Kasi pag medyo bumababa na yan sa level ng insulto, forget it! I will block you, I will mute you, I will make you disappear from my life.”

When asked to recall the times when her patience was tested due to bad comments or tweets, Lea shared, “I can’t remember na, I can’t. I can’t dwell on those comments, I have to mute you, I will block you, I will move on because for every one bad tweet or insulting tweet, there’s like tens more that are funny and fun. And karamihan naman sa mga nababasa kong tweet, masaya or showing you know or read an article that I wrote. There’s an appreciation; or even if there is dissent or criticism, hindi nang iinsulto.”

During a recent episode of Pinoy Boy Band Superstar, Lea was invited to the judge’s table by her long-time friend, Aga Muhlach. On this she shared, “We had a couple of guys who worked on Boy Band that came from The Voice so I went, because it was in Muntinlupa Sports Complex, malapit lang sa bahay ko, sige bisita ako. So I went to visit, and then all of a sudden I hear this, ‘can I call a friend?’ I’m like, ‘hay naku!’ So that’s what happened.”

On whether or not she is to have a reunion movie with Aga, Lea disclosed, “I guess the best answer I can give is it will happen when it happens. I can’t give a timeline.” The crowd then groaned, to which Lea responded with humor, “ano ba kayo? Bili pa kayo ng hopia, sige!”

Host Boy Abunda then commented and asked, “pero kinilig ang buong sambayanan, kinilig ka din ba?” Lea then admitted, “I think I was a little irritated at that time when he called me up there but I sincerely had fun. I had a good time and it was nice that I was able to give an opinion and the guy naman is his voice is better than Aga’s. I mean that’s not hard.”