Liza Soberano says her father almost chastised her after hearing rumors that she and Enrique Gil are now a couple. 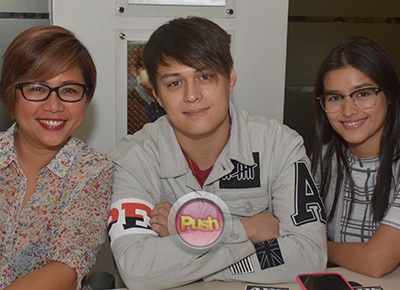 Blockbuster director Cathy Garcia-Molina is not entirely ecstatic at the prospect of love team Liza Soberano and Enrique Gil taking things from reel to real.

According to Direk Cathy things get “complicated” once actors start mixing their personal feelings into the craft.

“Ako ayoko! Ayoko! Iki-no-complicate ng relationship and every love team. I’d rather work with love teams that are not together in real life,” she stressed during the story conference of her upcoming film with LizQuen.

The burden of having real life lovers on the set is that they tend to carry the “emotion” that they have at that moment oncam.

“I’ve been with love teams that were in a relationship and trust me it’s not easy,” she declared.

So, selfish as it sounds, Direk Cathy suggests to LizQuen to “wait” a little longer.

“I’m not saying na hindi naman magiging in the near future but why rush? Parang they’re together everyday, they’re happy working together, they’re happy being with each other,” she said. “Bakit la-label-an pa natin? Bakit kailangan pa nating gawing relationship?”

For his part, Enrique explained that he and Liza are still enjoying each other’s company and that they are in no rush to make things official.

Questions about the real score between them was spurred by the recent statement of Liza’s manager Ogie Diaz, who surmised that LizQuen are now together but are only “hiding” their relationship from the public.

While they are “okay” in dealing with Enrique, he said that he doesn’t want to make any move “until they say, okay you guys can ano, the formality.”