Jadine on ‘Till I Met You’ being compared to OTWOL: ‘We’re not pressured’

Jadine explains why they’re not affected by the ratings. 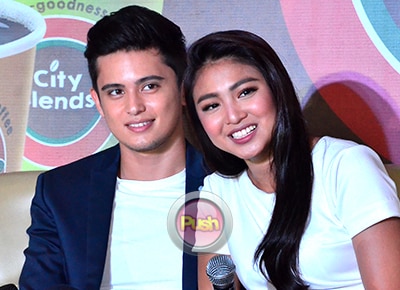 Coming from the high ratings of their last series On the Wings of Love, James Reid and Nadine Lustre hope to replicate if not surpass the achievement of their last project. Their new teleserye Till I Met You is approaching its first month run. James admitted it’s hard to compare the two series. "It can’t be helped. OTWOL was a phenomenon. But we’re not pressured. The show is doing well. The story is developing and we’re really excited for what comes next,” he shared during the 7-Eleven City Blends presscon held last September 22.
Nadine said she feels confident that Till I Met You will gain an even stronger following as the weeks go by. She said she is not afraid to build up their ratings as the story progresses. “Malapit talaga sa puso ng lahat ng tao yung OTWOL so you really can’t help it but I’m pretty sure Till I Met You will be the same din. We’re okay kasi everyone is enjoying talaga and from what I heard even all my friends watch it sa iWantTV kasi nga hindi nila naaabutan eh. They’re stuck in traffic and everything so they would watch it on iWantTV and na-re-replay pa nila. So we really don’t mind as long as everyone’s enjoying the show,” she explained.
James cited that part of what has been affecting their ratings is the option of some fans to just watch the show at a more convenient time through a Kapamilya website. “OTWOL was the start of a new kind of teleserye and it’s still very popular sa iWantTV. It can’t be helped but it’s a different story. It’s hard to convert the TV ratings to iWantTV ratings because our generation, the millennials, it’s really different. It’s hard to translate that into traditional ratings because we are different and they prefer to watch it sa iWantTV,” he admitted.
When asked what she thought of the song James recently composed for her, Nadine said she definitely felt ‘kilig’ when she found out about it. "Of course! (laughs) Pinaka-favorite ko is ‘Forever.’ Bakit yun? In the song kasi, parang lahat kasi eh swak na swak. At saka that’s the first song na narinig ko. Yun yung unang narinig ko talaga. But then super excited kasi all the rest of his songs are really good din,” she said. Nadine said she is also excited for when her boyfriend’s album actually comes out.
The Till I Met You actor said his girlfriend did not have to do anything special to inspire him to write songs. "Wala, wala siyang ginawa. I was just at taping one day, alone. I think we had different sets. I was alone and I wrote the song just like that. It just came out,” he recalled.
Celebrity