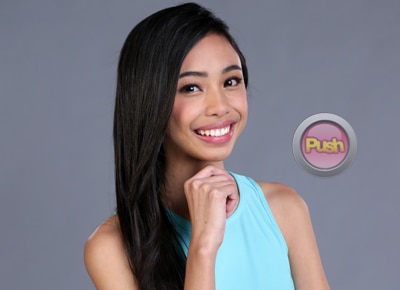 At first, Maymay told Big Brother that she was “nagtatampo” as after everything she did, she still has not met Enrique compared to fellow housemate Edward Barber who although did not do anything, but met his crush Liza Soberano.

Narrating the times she thought she was going to meet Enrique already, Maymay said that while Edward has a crush on Liza for three years, she has been Enrique’s fan for six.

And so, Big Brother tasked Maymay to do a choreography for Enrique’s song Oha! (Kaya Mo Ba ‘To) to teach in a special dance class.

Unbeknownst to her, the housemates were already preparing for her date with Enrique at the pool area.

Meeting her students, Maymay was surprised once again to see that the boys were wearing an Enrique Gil mask.

After their session, Big Brother told her that she still has one student to teach, much to her delight as she thought it was really Enrique. It turned out that it was only Edward wearing the same mask and pretending to dance like Enrique. Maymay seemed disappointed although she still laughed.

Edward then led Maymay to the pool area where they set up a table for her and Enrique. After Maymay changed clothes, she sat across Edward. Once again, she thought and hoped that she would finally meet Enrique.

Later, Big Brother called Edward to the confession room as he sent out Enrique to enter the house.

The moment the Kapamilya actor entered the glass door to the pool area, Maymay freaked out and ran towards her idol, hugging him tightly.

The second half of Maymay’s encounter with Enrique continues on Pinoy Big Brother on Thursday, September 22.