EXCLUSIVE: The Dawn to continue making relatable and socially-relevant music

The Dawn’s bassist Carlos Balcells recalls the music scene in the ‘80s and ‘90s, evolution, and their greatest achievement. 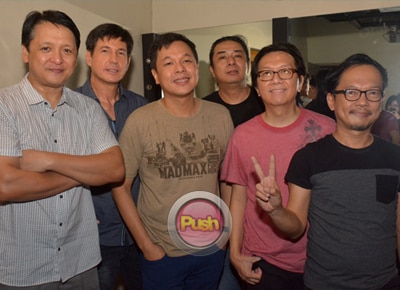 The Filipino rock band of the ‘80s, The Dawn, celebrated their 30th anniversary in the music industry through a digital concert last Sunday, September 11 via OneMusic.ph.

LOOK: The Dawn celebrates 30 years of music with online concert

Their bassist, Carlos Balcells, relived the time when the band was still starting out 30 years ago.

Recalling the scene to be filled predominantly with New Wave Alternative music, Carlos said that although there were many Pinoy bands then, they were regarded as “underground” and “not commercial or mainstream.” It was the solo artists who were more popular during that time.

According to Carlos, the band had a show where their manager invited recording companies to attend. One of them was OctoArts who offered them a recording deal. “That’s where from the underground, we transcended to the sort of commercial na. And then, we started guesting in radio (shows), Lunch Date, Eat Bulaga, Sharon, Vilma. And believe me, there were a few times that we went to the studio and we weren’t able to play because (local) bands were not really recognized at that time,” he narrated.

30 years later, Carlos said that the music scene has changed tremendously. “I would attribute it to two main reasons. One is piracy. Because of piracy, the local music outfits like Sony, BMG, wala na. It will not justify for them to spend for a recording for a band kasi wala, they will not be able to recover it, just as well as they did in the ‘80s and ‘90s. Two is of course, technology, the advent of internet. You know, with all these Spotify, YouTube and all that,” he said, counting the natural evolution of music as well.

With all these changes, one can say that it is truly an achievement to have stayed in the industry for three decades. Carlos attributed it to the camaraderie of the band members. “Hindi biro ‘yung 30 years and I think the sustainability of the band is just really, I would attribute it for the love of the music but it’s also the camaraderie because you know, in any group of people, it’s about chemistry,” he said, emphasizing on the importance on getting along together.

As for their greatest achievement, Carlos said, “I’d like to relate this to the Book of Life that everyone of us can contribute something to what they call the last two verses of life. So it can be in anyway. Sa’min naman, with our group, we have contributed in the Pilipino music. And, there’s nothing more gratifying than to have people come to us and say, ‘wow, we grew up with your music’…Our contribution is our music and if in such way, it had made anyone, a listener, happier or can relate to the music because of the emotion… then I think you can say that is the greatest fulfillment.”

Today, Carlos said that they are still looking forward to creating more socially-relevant music and songs that people can relate to.

Saying that they are open to recording more albums, he said, “The future is uncertain but as much as possible we would like to be able perform more live concerts. For 30 years, we already garnered, I think, eight, nine, 10 albums worth. Let’s say average of eight songs or 10 songs. That’s a sizeable archive of songs. The old and new Dawn.”

The Dawn popularized iconic original Pilipino music such as “Salamat” and “Enveloped Ideas.”