James Reid on Nadine Lustre meeting his family: ‘My whole family loves her’ 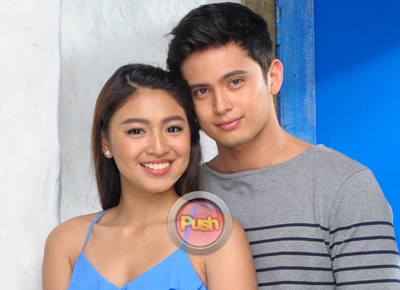 When photos of James Reid and Nadine Lustre attending the birthday of each other’s mothers surfaced online, fans immediately took this as a sign that the couple’s respective families not only approved of their reel and real relationship but supported it as well.

On James and his sister Lauren’s going out with Nadine’s family photo, James said it was just a simple family birthday dinner for Nadine’s mom.

"It was the day we got back (from abroad). Lauren just wanted to tag along that night. Actually that was the first time for Lauren to meet Nadine’s family. But it was good fun. It was just an intimate family thing. They loved Lauren. She’s very friendly. Birthday ng nanay niya. We had gifts for them (that we got) from the airport. That’s the best we could do. We were so busy,” he admitted.

James revealed that his dad already approved of Nadine from the start.

"My dad loves her. My whole family loves her and she gets along with my brothers and sisters. I don’t think there’s any rush to go that far [as to settle down]. I’m just having fun, we’re enjoying,” he shared.

The 23-year-old also talked about the showbiz careers of his two siblings Jack and Lauren.

"I was the one who actually convinced Lauren to join and to take the leap so I’m behind her all the way. She already knows about bashers. I already explained to her how it is. It really doesn’t matter. She’s handling it very well. She’s tough so it’s going to take a lot more than bashers to get her down. Jack’s just having fun, [having] a lot of fun going along with it, trying to find himself. Much like I was at the start, still very lost about where my position is,” he explained.

As part of one of the hottest love teams in the country today, the Till I Met You actor said he is already used to being compared to other celebrities. But James said he has equal respect for other love teams just like Daniel Padilla and Kathryn Bernardo who star in Barcelona: A Love Untold.

"Well the Kathniel movie is coming up. They’ve been the biggest love team like forever so of course there’s lots of noise. Everyone’s really excited for them,” he said.

When asked if he had plans to watch the movie, the Fil-Australian hunk said it depends on his work schedule. "If I have time. Of course I'll support,” he added.