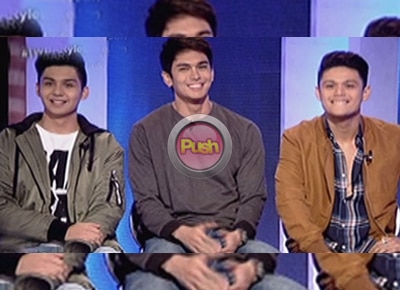 On Tonight with Boy Abunda, three members of Hashtag—Luke Conde, Jon Lucas, and Ryle Santiago—got personal and opened up on the women they’re being linked to.

On whether or not it affected his relationship with fellow Hashtag member, McCoy de Leon, he clarified, “hindi po. Kami ni McCoy super okay po kami ngayon kahit po ayan sila,” pointing to a photo of McCoy and Elisse shown as a backdrop.

Hashtag Ryle clarified that his relationship with Barbie Imperial is at the “enjoying getting to know each other” stage. He said, “we’re really, really. really good friends. We support each other whatever happens like, ‘oh, ganito ako today, ganito ako tomorrow. Galingan mo, I’ll watch.’ Like that po. More on companionship muna.”

Ryle has had two girlfriends in the past. When asked if he would allow others to court Barbie, he replied, “yeah. Wala pa naman pong label, we’re just friends pa naman at the moment. If ever mapunta kami sa time na yun, dun siguro ako aayaw.”