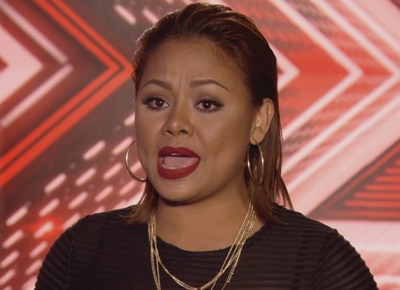 Ivy Grace Paredes from Bukidnon floored the judges of this season’s The X Factor UK, which includes Simon Cowell, Nicole Scherzinger, Sharon Osbourne, and Louis Walsh. The Filipina, who flew in just for the competition, sang Whitney Houston’s hit “All The Man That I Need.”

It was last year’s finalist and fellow Filipinas 4th impact that made Paredes think about joining the Britain based reality competition show.

“Last year I was browsing the Internet, because I can only watch X Factor on YouTube. I don’t have a television. I watched 4th Impact the group of Filipino sisters. When I watched them, I felt really inspired and thought if they can make it, I can make it too,” Paredes said on her intro.

“I have a little girl, she is two years old and six months. At the moment, while I am here she is there in the Philippines, and my mama and papa is taking care of her. I am not really getting any younger.”

She finished, “If I get the four yeses today, Oh my god! I will go crazy! I want this!”

While singing, the judges were exchanging smiles obviously impressed with the Filipina’s voice. As she belted out her final note, the four judges cannot help but look at each other and applaud. After her performance of Houston’s hit, Cowell had to ask, “What just happened there?”

Scherzinger, who is also part Pinay, was impressed and told the X-Factor producer and creator, “She just sang our faces off, pretty much, that’s what happened.”

Cowell agreed, noting that it was the second half of the song that made a mark on him. He told Paredes

The producer known for his sharp tongue was quick to add that Paredes was one of the best auditions that they had.

Scherzinger agreed, telling Ivy Grace, “Everyone comes in here and say they want it so bad but that is called wanting it and fighting for it.”

Louis Walsh who had been a judge since the show’s inception but who took a break for two years commented, “You are sensational, like a little diva!”

Reality show star Sharon Osbourne said to Paredes, “You did yourself proud.”

Before deciding on her fate on whether she gets on through, Cowell asked Paredes why she joined. Her reply was simple, “for me, I believe this is the biggest competition and I want to be a part of it. And X Factor can give me the stepping stones I need to do good in the future because this is all for my daughter."

With four yeses down pat, Ivy Grace Paredes gets on through the next stage of the X Factor UK, which is boot camp.