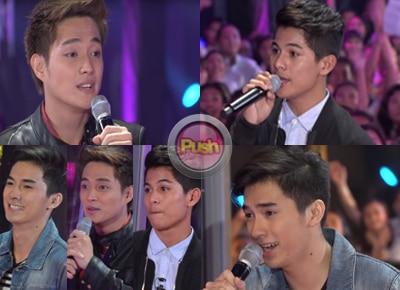 Possessing both talent and charm, three aspiring boyband members made it through to ABS-CBN’s newest talent contest Pinoy Boyband Superstar as it premiered on Saturday, September 10.

Among those who successfully passed the audition process led by judges Aga Muhlach, Sandara Park, Vice Ganda, and Yeng Constantino, as well as the female live audience, included 17-year-old Allen Cecilio from Caloocan City. Having garnered a 98% approval rate from the audience, the teen who serenaded with “Yakap sa Dilim” got all of the judges’ ‘yes’ vote.

Next was the 21-year-old Ford Valencia who garnered an 83% audience rating. After singing “All of Me,” he got three ‘yes’ votes from Aga, Sandara and Yeng.

Last was Neil Murillo who performed “Mahal na Mahal” before the judges, eventually getting all of their votes. The 17-year-old lad from Cebu City got a 96% approval rate from the audience.

Be sure to catch more of Pinoy Boyband Superstar, airing on weekends at ABS-CBN.