The former matinee idol conducted a drug test on himself. 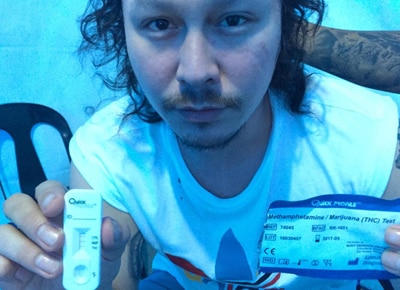 Several celebrities are now showing their support to the present administration’s campaign against drug use by doing a volunteer drug test. Recently, 40 Star Magic artists went through drug testing and all of them tested negative. Among those were Diego Loyzaga, Jake Cuenca and Enrique Gil.

Baron Geisler on the other hand posted on Facebook that he took a drug test using a portable kit.

“I know everyone is wondering about me, I'm fine and good. I think this is a great idea for everyone to have, just in case anyone is accused online or by the police,” he wrote.

He tested negative both in Methamphetamine (shabu) and THC (marijuana).

In his previous interviews, the former matinee idol admitted that he’s an alcoholic and a heavy smoker.

The actor has made headlines because of his short temper and his involvement in brawls. The most recent one was with actor Kiko Matos.