Bianca Manalo admits that she and boyfriend Fabio Ide talk about settling down. 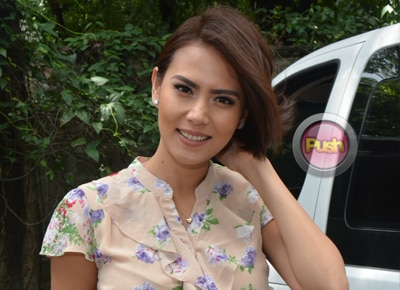 Beauty queen-turned-actress Bianca Manalo admitted that although she and Brazilian-Japanese model boyfriend Fabio Ide talk about settling down, they are not engaged yet.
Saying that she is proud of him during the last taping day of the fantasy series My Super D, Bianca told members of the press how loved she feels. “Masyado akong maganda sa paningin niya… Iba eh. ‘Yung para bang sobra niya akong mahal. Kahit anong gawin ko, mahal na mahal niya ako at alam ko ‘yun. Nararamdaman ko talaga… Kagabi lang sinabi niya sa’kin, ‘I will never give you up’ kahit nagkakaroon kami ng mga little misunderstandings kasi parte naman ‘yun ng isang relationship. Talagang iba this time. ‘Yung talagang kahit ipush away ko siya, nandidiyan lang siya,” she said.
And because both of them are working, Bianca shared that they would savor each moment that they spend together.
Asked when the couple who have been together for a year already plan to settle down, she answered, “Nako hindi ko talaga alam kasi wala naman sa akin ‘yun. Nasa kanya ‘yun.
“Ako kasi naniniwala ako na if it will come, then it will come. If it will happen, then it will happen,” she added.
Meanwhile, Bianca was also asked about her relationship with Fabio’s child with Denisse Oca.
“Okay kami ‘nung baby. We spend time together pagka-wala akong ginagawa, sumasama ako,” she said, later adding that she plays with Fabio’s kid as she is fond of children.
Moreover, Bianca added, “When I step into this relationship, I knew in my heart na may anak siya. Package ‘yun eh… Mamahalin mo siya, buo, kung anong meron siya.”
Earlier, Bianca shared that she prays for the Lord to keep the balance in her life considering that she has a career and a happy personal life. She also later said that she prays for her present relationship to be ‘the one’ for her. “’Pag nagpepray ako, lagi kong prayer na sana ito na talaga kasi ayokong umulit na naman,” she said, adding that both of them share the same culture and values.
Bianca also recalled that years ago, Fabio already tried courting her but she turned him down. They saw each other again during a time when both of them were single, “Hanggang sa ‘yun na, nagstart na ulit.”
Celebrity