EXCLUSIVE: Gerald Anderson takes pride in being a lieutenant

Gerald Anderson’s K-9 Search and Rescue foundation has been tapped by the Philippine Coast Guard. 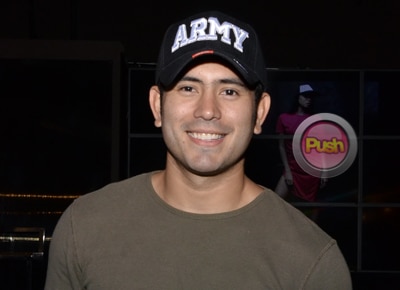 Gerald Anderson finally fulfilled his lifelong dream of being part of the military when he was inducted by the Philippine Coast Guard as a squadron lieutenant on Monday afternoon, July 4.
Aside from Gerald, his father Gerald Anderson Sr. and brother Ken Anderson were also inducted as a captain and a lieutenant, respectively.

The How To Be Yours actors’ newly-established Gerald Anderson Foundation signed a partnership with the Philippine Coast Guard to support the K-9 Search and Rescue units in the country.
“Medyo malaking responsibility pero we’re happy kasi it’s a good partnership na nagtutulungan kami,” Gerald said in an exclusive interview with Push.com.ph.

Gerald’s foundation currently has five trained dogs, which according to him will be included in the Coast Guard’s 16 teams of dogs to be used for future emergencies.
“Sa Japan, they have 250 teams and we have 16 for the whole Philippines. So kapag may nangyaring mas malaki and with just 16 teams so parang wow,” blurted Gerald. “Ang kinakatakutan natin ngayon eh ang The Big One. Di ba nag-shake drill tayo? So what if that happens ‘di ba?”

The actor underscored that great improvements have already happened to his foundation ever since he launched it last March.
For starters, several donations have been made for their dogs including a lot in Subic where they were able to put up a kennel. Their dogs also graduated from a water search and rescue training two months ago.
Then there was the Philippine Coast Guard tapping them to be part of the K-9 search and rescue team of the country.
According to Gerald, they are far from stopping as they are also set to open the first-ever pet hospital inside the Philippine Coast Guard base in Taguig this Friday.
“I’m throwing all my energy into something positive. It inspires me to live and to work,” said Gerald about his relatively new endeavor.
“We’re very thankful, sobrang surreal rin ng experience ko kanina kasi pangarap ko talaga pumasok sa military. Parang kanina natupad ang pangarap na ‘yun. Nakakatuwa,” he added.
The goal, Gerald said, is to increase the number of K-9 units to at least 30 or 50 before the year ends. Aside from that, his organization will also be teaming up with the Coast Guard in mounting environmental awareness events involving the youth.
What does being a lieutenant mean?
“Ako ang in charge sa search and deployment at sa lahat ng equipment. Practically lahat because this is my baby eh so malaki ang responsibility because they look up to me for leadership,” he explained.
Gerald pointed out that he is taking part in the organization as a volunteer and not merely as a celebrity.
“Medyo madugo siya pero ang foundation parang may pamilya ka eh. Na everyday may bagong nangyari. But just like a family may purpose eh and fulfillment and kahit pagod kana,” he ended.
Celebrity