Bamboo on JK Labajo's success: 'I'm very proud of him' 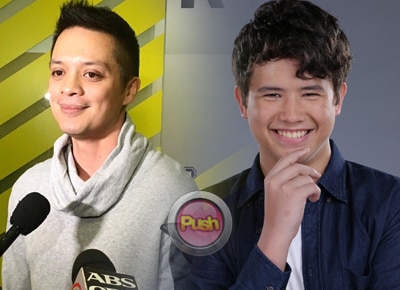 Bamboo expressed how proud he is of his former The Voice Kids team member JK Labajo for the achievements of the latter in the entertainment industry. JK was also recently announced as one of Pinoy Big Brother’s Season 7 housemates.
"You know I mean I just knew it.  He just deserved that he's doing his thing and yes he is learning as well and the the thing I'm very proud of him is hindi niya kinakalimutan ang music and his taste in music napakagaganda," he said.
He added, "'Yun ang parang napasa ko sa kanya eh,  naturo ko na parang 'Coach may ipaparinig ako sa'yo' and it's like wow that's something different,  hindi ko ini-expect. I'm very proud of him and Elha and every child on my team and everyone who makes it."
Now on his third season of The Voice Kids as a coach, is there still any pressure on his part to be chosen by the contestants during the blind auditions?
"It's not pressure,  may belief kasi ako na you need to fight for every child. That's what I always say and you want the child to feel that this coach wants me.  Sa akin parang deservice sa bata yun kung lalaban ka ng half lang.  Kung lalaban tayo, all in ka dapat."
When asked about how does he think of Sharon's performance as a a new coach in the show,  Bamboo is all praises of the Mega Star.
"It's been great. Initially nong unang araw you're thinking about the chemistry eh.  Of course coach Lea and I have been working for couple of years so you're thinking how it is gonna work. And it worked out fine and coach Sharon is fun,  she's crazy and what I also heard is a good sensitivity to her and she feels the children as well and the children feels that. So it's a good fight that what makes it as a great season."
Bamboo believes that the best part of the show is the blinds audition and he said that the next stages will be tough for them coaches.
"This is the best part of the show because this is the part that you're welcoming people to your team so this is the best part. The  hard parts are the next weeks especially kay coach Sharon,  I think it's gonna be tough for her seeing the kids go."
Does he already have some bets among his team members who could possibly win the show?
"Hindi pa kasi masyadong maaga pa sabihin 'yun eh. Sa akin we only see that as the season progresses. Ngayon pa lang we'll see who has really the feel for performing and singing," he responded.
Celebrity