Jessy Mendiola thanks Pia Wurtzbach for defending her

The actress responds to the bashing and negative comments she is getting online. 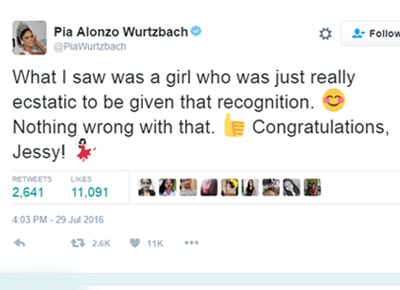 “Well, I guess I’ll just have to suck it up. Wala, I’m just being strong,” was actress Jessy Mendiola’s reply when asked about how she is dealing with the issues she is going through lately.

Aware of the bashing that she has been receiving, Jessy admitted, “Yes, I’ve read not only comments; I’ve read a lot of articles, blogs, mixed opinions and everything.”

“We all have our own opinions, yes but for me, before I post something online, I think about who the people I’m going to hurt. I guess we can all post whatever opinions we want to post or our views or ideas kaya lang sana, let’s all be responsible too. Sa panahon ngayon, randomly, pagka may comments na masasama or bashing, binibisita ko ‘yung profile and you can see na as young as 10 years old, as young as 13 years old. So I think let’s put aside all the hate and the bashing, let’s be more responsible not only for us, our actions or our words but also for our future generations,” she said.

Netizens slammed Jessy for this, Miss Universe 2015 Pia Wurtzbach came to her rescue on Twitter and wrote, “What I saw was a girl who was just really ecstatic to be given that recognition. Nothing wrong with that. Congratulations, Jessy!”

Jessy then shared she messaged Pia back. She also cleared that she was only joking during that time and her words were taken out of context.

She said that she asked some of her friends, who are also friends with Pia, to extend her gratitude to the beauty queen for defending her.

“Ang sweet nga niya to tweet that. Kung siya nga nakita niyang as a joke ‘yun eh bakit parang other people won’t see that as a joke, too,” Jessy added.

Meanwhile, when asked how she responds to comments that she became boastful, Jessy has this to say, “’Yun din ‘yung naisip ko kasi parang sa pagkakaalam ko, hindi ako nagmayabang. Pangalawa, wala naman akong nilait na tao o minaltrato pero siguro for me, why do people hate others who are just so confident with themselves? Sa panahon ngayon, instead of us women helping each other to stand up and be strong, tayo pa ‘yung… ‘Pag nakita natin ‘yung flaw niya, i-ngungungod pa natin o i-didiin pa natin instead of like, ‘Hey it’s okay, you have this to feel pretty or to feel confident.’ Kumbaga sana, not only with women, all the people, not only on social media, kumbaga tayong lahat tignan muna natin ‘yung mga sarili natin bago tayo magsalita ng masasama sa iba.”