EXCLUSIVE: Krystal Brimner and Isabeli Elizalde all set to star in ‘Annie the musical.’ 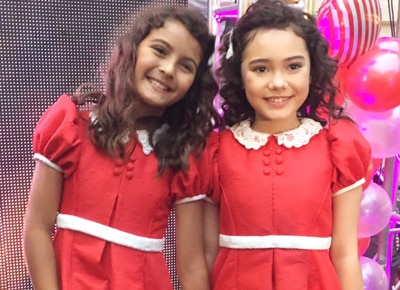 After being introduced as the lead stars of the upcoming stage production of Annie, child actresses Krystal Brimner and Isabeli Elizalde revealed they are currently enjoying rehearsals which started with a workshop last May. Krystal was last seen in the MMFF film Honor Thy Father where she played John Lloyd Cruz’s daughter while Isabeli Elizalde is the daughter of former model Bianca Araneta-Elizalde and will be making her acting debut with Annie. “It’s been really fun because the director Michael Williams he makes us laugh all the time. It’s so great. I feel more confident now. Our director is very fun and he’s good at directing us,” Isabeli told Push during the Annie trade launch held last July 27 at Resorts World Manila in Pasay.

Part of the play’s challenge includes acting on stage with a trained dog which Krystal says was not a problem for her. "I have 12 dogs at home so I’m used to dogs. I was already training with the dog. It was so fun it felt like having my own dog,” she shared. Unlike Krystal who is home schooled, Isabeli said she had to adjust to a busier schedule because of the play. "I start school tomorrow because mine is the US summer so I was out for June and July that’s why I missed some of the dog training. But I have to miss my first day of school because I have my presscon tomorrow,” she shared.

The two admitted that they both idolize Lea Salonga when it comes to performing and also because Lea played the role of Annie in one of the earlier versions of the play. They admitted that if The Voice Kids coach would come and watch their performance it would be such an honor for them. “My favorite scene is it’s a ‘Hard Knock Life’ because it’s fun, we get to dance, we run around,” she added.

As a newcomer, Isabeli admitted that playing the lead is a big responsibility. “The most challenging part is maybe learning our lines? It’s very big lines because we’re like in 95% of the show. So we have to memorize every line. Sometimes we get tired. It depends if we’re doing choreography but if we’re just singing it’s not really tiring because we’re just sitting down (laughs). Krystal and I are really close now. I love her. She’s my buddy,” she said.