Janella Salvador reacts to the success of 'Born For You'. 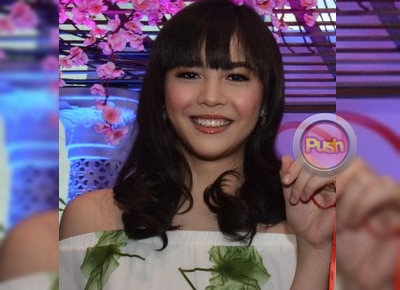 Now that she is on primetime TV, Janella Salvador admitted that there is added pressure for her show Born For You to fare well in the ratings, which she is thankful that they were able to do.
"Siguro 'yung pressure was more on the first week. Siyempre now may pressure to maintain the ratings but now sobrang tuwang-tuwa na now we actually reached the 20 percent mark and that's what we are aiming for," she said.
On what does she think is the reason her team up with Elmo Magalona is effective, she commented, "Siguro it's just that we got to bond with each other talaga nong nag Japan kami.  Siguro don nabuo any mas deeper knowing each other."
Janella said that she could somehow relate to her role in the show. "Ito 'yung character na iba ang closeness sa puso. Nagmumusic siya and I Iove music and it give me the chance din to play the ukelele," she shared.
She also shared that it is one of her dream roles. "It's my first role na hindi siya sosyal and maarte and ito 'yung role ko na pangmasa..."
With the success of the show, Janella is very thankful. "When I found out about the ratings lalo nong nag 21 kami, I'm just thankful to all who supported it and natuwa kami na nag-worldwide trend kami."
Janella also relayed that she is evolving as an actress as time passes by. "Honestly when I started out sa Be Careful (With My Heart) alam ko talagang hindi ako marunong umarte. I didn't expect for everything to come so fast. After Be Careful nag-hit siya and binigyan ako ng sariling show na Oh My G and now I have my own first primetime show. It's all being given to me, I don't know what I did to deserve it. Pero so far I am enjoying acting nong una hindi ko inexpect na maienjoy ko siya dahil I didn't know what I'm doing at first pero ngayon ini-enjoy ko talaga siya," she said.
Celebrity