Ylona Garcia is proud that she and Bailey May have stayed the same since PBB days. 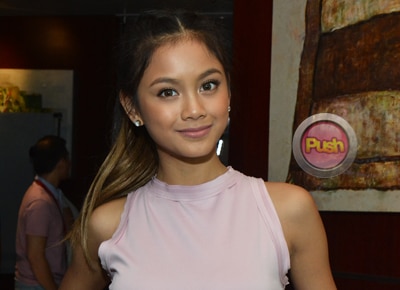 Next Teen Superstar Ylona Garcia stressed that fans who are divided on rooting for her with Bailey May and with Darren Espanto do not need to get into a fight.

In an interview with Ylona during the blogger’s conference of her upcoming One Music PH digital concert My Name is Ylona Garcia she detailed just how close she is to the two teen stars.

“You know what, I don’t know. You know, Darren and me are really close friends, as well as Bailey and me, so I don’t know what really happened,” she began.

The 14-year-old singer-songwriter added, “Parang I’m just in the middle of them.”

For Ylona, being paired to the two is a blessing.

“I really think of both of them because what’s really happening is they’re helping… as peers, we’re really helping each other with our careers. Especially of our ages as well,” she said.

But what is the real score between her and Bailey?

According to her, she and Bailey have yet to talk about “leveling things up” between them.

“I don’t know kasi we are still young siyempre. We don’t really want to talk about stuff like that muna. You know ‘Love you best friend!’” she joked.

Nevertheless, Ylona couldn’t be any happier that she and Bailey have managed to stay the same a year since stepping out of the Pinoy Big Brother house.

“Kasi I keep telling him this na ‘I’m so glad you didn’t change and you’re still the same person I knew from PBB.’ He told me the same thing eh. He told me not to change and we try not to let it get into our heads,” she said.

While she was forthcoming about her closeness with Bailey, Ylona was mum about his participation in her first ever-concert-cum-album-launch. But she did confirm that he will be at the concert which is set to stream on One Music PH’s website this coming July 29.