The actress admits her relationship with her mom is affected by her new teleserye role. 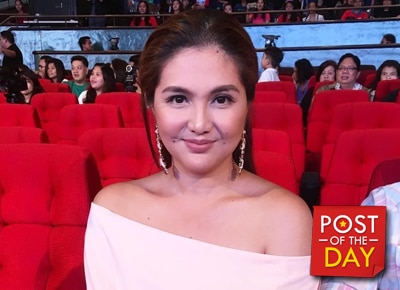 Dimples Romana posted an emotional message on her Instagram account on how she realized that she needs to spend more time with her mom.

This was after she learned the story behind her serye "The Greatest Love" from writer Ricky Lee.

The actress said she is guilty of not spending much time with her mother and how her role has made her a better daughter.

“I dreamt of having a super long table in the farm for get togethers like this one. ?? this happened because right after we shot the #TheGreatestLove teaser where our Nanay Gloria played by Ate Sylvia Sanchez, revealed to her fighting, chaotic children over dinner that she has dementia, I had a realization ?? Tapos while I was listening to the interview of Sir Ricky Lee regarding our story for our new teleserye, He mentioned something like, "Sino nga ba ang unang nakakalimot? Ang magulang ba o ang mga anak?" Kadalasan daw iniisip natin marami pang oras. Na pag umalis tayo, nandyan lang ang ating mga magulang at pagbalik natin, nandun parin sila.

“And it hit me, Sobrang busy ko maging nanay at asawa nakalimutan kong anak din ako. My mama and I are close but I'm so guilty of not being able to spend as much time as I should with her. And this came as an awakening for me. I needed to change things. I won't wait until Mama can no longer remember anything or when she's too old to enjoy moments with us. Now I call her more often, check on her. See if she needs anything, if she wants something.

“Ang galing lang kasi sobrang lakas ng effect sakin nung teaser namin for #TheGreatestLove. Kaya I'm also praying somehow, it'll also affect u in a way that you'll want to love your family more. And reach out and make more beautiful memories with them. ??that was the #TheGreatestLoveEffect on me ??#celebratingMama,” The actress said in her post.