Piolo is not even worried that his son is dating someone. 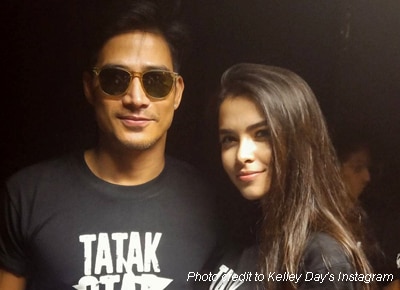 Ultimate Hunk Piolo Pascual is back in the country after two months of taking a break and traveling abroad with his mother.

During the Money for Life press conference of Sun Life Financial Inc., Piolo was welcomed with the news that his son Iñigo Pascual is already seeing someone.

It may be recalled that the younger Pascual recently admitted to seeing GirlTrends member Kelley Day.

What does he think of the Filipino-British Kapamilya talent?

Instead of feeling anxious that his son is seeing someone, Piolo seems to be all out support with Iñigo.

“I'm more excited about what he's gonna go through as a man, independent,” he began.

Piolo believes that nothing can replace real life experience.

“You know, kailangan mong matutunan yung mga bagay through your own experiences.

“I'm just excited for him for what it can teach him,” he continued.

Meanwhile, Piolo happily shared that their relationship as father and son are getting stronger and stronger.

“He surprised me when I arrived. He was at home, nasa bahay siya nang dumating ako.”

The prized Kapamilya star appreciates the fact that his son is really making time for him.

“We've been spending time every day ever since I arrived. Nag-cancel siya ng trabaho because he wants to spend time with me. We've been sleeping together. I'm really happy because he's around me,” he sad.

Although he is still in the process of choosing the school and the course that he is about to take, Piolo confirmed that Iñigo is coming back to school. He added that Iñigo will be having a regular schedule once he starts with his first year in college.

Speaking of studying, Piolo himself shared that he did “go to school” while overseas studying Christian Apologetics at the Oxford University together with Jodi Sta. Maria, Hayden Kho and Victoria Belo.