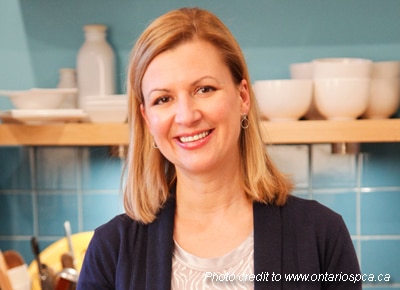 As a familiar face on the Asian Food Channel, Canadian chef Anna Olson admitted she didn’t initially think she would end up as a chef. After studying political science in college, she worked a few years in the banking industry. "I grew up loving food. It was always a hobby. I would bake with my grandmother. I would work in restaurants because it just drew my interests but it took a while to figure out that it was a career path I liked. But when I decided to make the switch, I went from quitting banking to three months later I was on my way to cooking school. It was about six years ago when my show started airing on the Asian Food Channel and I had no idea I would find such a loyal audience here and I want to honor and respect that because I really value that,” she shared during the Inspired by Anna Olson press event held last July 15 in Makati city.

In her newest show Inspired with Anna Olson, she returned to the country to meet and do episodes with top local chefs like Margarita Fores, Claude Tayag, and Rob Pengson. "There’s so much more to see in the Philippines. I would like to get a sense of the regionality of the country. The food here is a big broad umbrella because there’s all these regional styles. I had a great time here in the Philippines. I had met Claude Tayag from Pampanga before so I felt like I was reconnecting with him. And it was great to really get an understanding of that regional style of cooking. Chef Rob Pengson was lots of fun because he’s just kind of got that young energy and cooks Filipino food but with a twist, a broader global twist. And then chef Margarita Fores I feel like I became really good friends with. I only wish we could live closer because I feel like then we’d hang out. I loved her sense of style. She’s very, very kind and there’s a sense of giving when she talks you through her recipes and I really admire that,” she admitted.

Chef Anna said she was not totally unfamiliar with Filipino food while she was in Canada. "I thought I had a good sense of what Filipino cuisine is. I had some friends from the Philippines growing up. I remember going to my friend’s birthday party when I was about 10 and we had lechon so I’d been introduced to some dishes at a younger age. But really there is such diversity. Of course being a series of islands there’s fresh seafood which is something we just don’t have access to at home. So whenever I’m here I really try and eat as much fresh fish and seafood as I can. But then some of the preparations like the adobo, the sinigang, the sort of stew broth based dishes I really have come to appreciate. Because you can’t just eat it once and expect to know it. You learn how many different styles there are and different combinations so I’ve appreciated the diversity of the cuisine,” she said.

The Inspired with Anna Olson host also revealed what sets apart Pinoy cuisine from other countries in Southeast Asia. "Oh here’s such a difference in the style. Even though there may be fundamentally some similar ingredients like the use of coconut, the use of agar and rice as a foundation of the cuisine, the preparations are altogether different and interesting and delicious. There’s an honesty I find in Filipino cuisine. It’s really fulfilling. It reminds me of comfort food that I get at home,” she added.

The traditional Pinoy desserts like halo-halo are also one of the things chef Anna found very interesting. "I’ve had the sans rival torte from Pampanga with the meringue and the cashew butter cream. I’ve had the turon and of course the halo-halo. It’s such a sweet dessert! You’ve got the beans and the corn and the ube. And I thought, ‘Well that's a plate of vegetables but that does not taste like vegetables.’ But it’s inspired me to rethink how I work with fruits and vegetables into my cooking in a little different way,” she shared.

If given the chance to prepare a meal for newly elected president Rodrigo Duterte, chef Anna said she would want him to taste her version of the adobo. "Well I’d love to invite one of the local chefs to work with me to make sure I prepare something appropriate. But I guess being inspired I would love to share my beef stew recipe that is inspired by adobo to see if that connection is made between the Filipino and the Canadian dish. I do add soy sauce to it and sweet potato for the sweetness. So I’m trying to replicate all the contrasting flavors that are in adobo but with ingredients that I’m used to making,” she explained.

Watch Inspired by Anna Olson exclusively on the Asian Food Channel on July 29, Friday at 9 pm on SkyCable Channel 22.