Carmen Soo is still open to work with Jericho Rosales in the future. 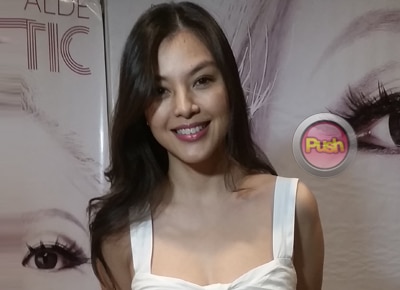 Almost a year since she has last laid foot in the country and Malaysian star Carmen Soo says that she misses the Philippines a lot.

Carmen, who dropped by at Michelle Ayalde’s HiPnotic album launch after party in Kuala Lumpur, Malaysia on July 15, happily talked to PUSH and other members of the press about what she’s busy with at the moment.

“I actually just finished a TV series in Singapore and it is airing right now. I’m also co-writing a book, it’s basically a compilation of stories about people along with a movie, which will be released later this year. So I’ve just been behind the scenes and writing for a change,” she said.

Despite her tight schedule, Carmen shared that she is very happy with her life right now.

It may be recalled that Carmen rose to fame in the Philippines after co-starring with Jericho Rosales on Kahit Isang Saglit in 2008 and appearing on It’s Showtime as a hurado and on Wowowee as one of the hosts in 2010.

Carmen admitted that she misses the Philippines, which had been her temporary home for almost five years.

“I actually brought my husband to the Philippines during the Star Magic Ball last year. It was a really short trip but I’m really looking forward to coming back because I miss the beaches, my friends, the food, garlic rice,” she shared.

Is there a chance for her to return to the country?

“I don’t know. I think my base will be in Malaysia. I still travel around for work but we’ll never know if there’s a project. Hopefully there’s a project for me,” she said. “Yes definitely looking forward to going back to get working, soon hopefully.”

Carmen shared that she also got in touch with Echo a few months back and is well aware that he too is already married.

“It’s just a matter of a right project and also the right time, hopefully one day,” she said.

Meanwhile, aside from enjoying her many projects, Carmen is also happy about her married life. Carmen tied the knot with Benson Tan in Bali last year.

“It’s good. Actually it feels just the same as before. Nothing much has changed which I think is a good thing,” Carmen said of her married life.

But Carmen and Benson are yet to have their mini-mes as Carmen is well aware that “stress” plays a huge part as to whether a woman gets pregnant or not.

“I just don’t really want to be stressed about it. I don’t want to put too much pressure because relaxing is key,” she said.

Carmen, however, admitted that she wants the baby to come naturally even if she’s getting so much pressure from a lot of people surrounding her.

“Yeah because everybody asks especially after you get married, that’s the question right? When when when?” she said.

For what it’s worth, Carmen is very grateful that her husband understands that she remains passionate about her job.