OTWOL Reunion at “Rak of Aegis” 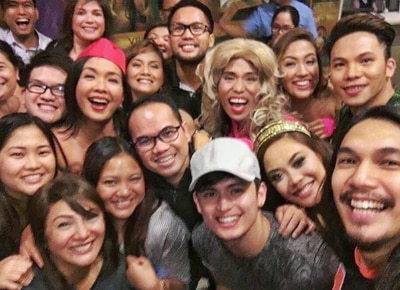 Last Friday, July 10, the cast and crew of the hit teleserye On The Wings of Love were reunited during a show of the longest running original Filipino musical Rak of Aegis at the PETA Theater Center.
James Reid (who played Clark Medina) watched with his siblings Jack and Lauren to support former cast mates in the series: Isay Alvarez-Seña (who played Nanang Rona), Benj Manalo (who played Axl), Rafael “Paeng” Sudayan (who played Kiko), Neomi Gonzales (who played Betsy) and Phi Palmos (who played Phi-Phi).


James also had a special appearance in the show. He was brought to the stage and had his photo taken with Aileen (played by Kim Molina) and the other residents of Villa Venizia. While standing on a small plank of wood, he was asked to jump for a jump shot and he willingly did in front of the audience. He was also very game in drinking some “bahajos” after being dared by the cast.

Some cast members of Rak of Aegis also showed their excitement and posted their photos with James on Instagram.

It was definitely a memorable night for the cast and crew of the hit teleserye. OTWOListas all over the world felt very happy and nostalgic at the same time after seeing some of the cast members reunited again after such a long time.
James Reid will be reunited with his real life girlfriend Nadine Lustre in their upcoming teleserye Till I Met You which will also be directed by Antoinette Jadaone, who was their director for OTWOL.
Celebrity