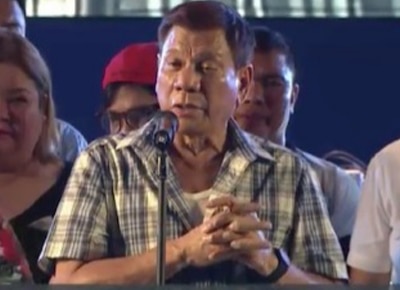 Celebrities joined the thousands of supporters of incoming president Rodrigo Duterte in the thanksgiving party held in Davao’s Crocodile Park yesterday June 4, 2016. Among the celebrities who were spotted there were Bayani Agbayani, Arnel Igancio and Kat De Castro, who were the hosts during the event.
The unkabogable star Vice Ganda also graced the said event. However, because of heavy rains and a power outage, Vice was unable to perform on stage.
"Nakakaiyak! Hindi man nakapag-perform dahil sumabog ang kuryente okay lang. Sapat na sa akin ang nagkita-kita tayo, nagkawayan at nagkamayan," Vice Ganda wrote on his Twitter account.
Sarah Lahbati, Aaron Villaflor, Carlos Agassi, Joyce Pring and The Voice Kids of the Philippines finalist Reynan Dal-Anay, from the Manobo tribe, performed at the thanksgiving party as well.
The presidential son Baste Duterte also attended the event and gave a speech, where he urged the people to ‘build a better tomorrow for our children.’ He also thanked those who supported his father during the election period.
The President-elect also made the time to give his message for his supporters during the thanksgiving party, saying he will prioritize health spending and education once he assumes office on June 30.