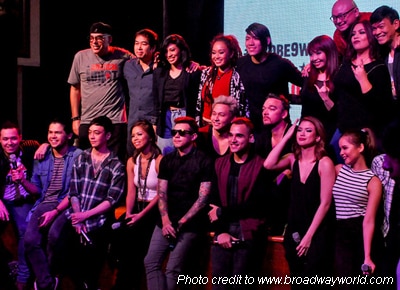 “My Americans are Fil-Americans. That was my take,” said director Robbie Guevarra revealed yet another major difference of the Philippine production of American Idiot. This “untold history” is unknown even to those who were part of the production. “This is the history I never shared with the cast.”
His take on the lead characters was unique and realistic. “My interpretation of Johnny (played by Jason Fernandez) was a Fil-American who grew up in the Philippines. His mom married Brad, the dad, mail-order (bride). He has been in the States for only three to five years. His barkada, Will (played by Miggy Chavez), is a Fil-Am, born in the States. The reason why Johnny is unemployed is because he wasn’t even naturalized. Will is naturalized, but lazy. Then they have their Latino friend, Tunny (played by Nel Gomez). If you’ve been to Daly City or San Bruno where there are a lot of Filipino-Americans, that’s the way they behave.”
Delving deeper into the history of his characters allowed Guevarra to present his own creative twist to the musical. Whereas the West End production would portray white Americans, Guevarra has a different take on it.  “We don’t look like that. We don’t act like that. Fil-Ams, that’s my take. I didn’t share this to the cast because they might get conscious and not behave instinctively as Filipinos who were set in suburban America.”
The musical is called American Idiot, but as Guevarra pointed out, “Who said they were white Americans? They’re Filipino-Americans. There’s a white man, Basti Artadi, who is the American dream of Tunny, but is a drug dealer. He is the American idiot. That’s my interpretation.”
Catch also the amazing performances by Yanah laurel, Ela Lisondra, and Alex Godinez. Also watch out for Norby David, Ariel Reonal, Kai Atienza, Mako Alonso, Sarah Facuri, Mark Tayag, Gian Gloria, Shalee Vicencio, Kendrick Ibasco, and Chesko Rodriguez.
American Idiot shows are on July 1, 2, 3, 8, 9, 10 at the Globe Iconic Store, Bonifacio High Street Amphitheater, BGC, Taguig.
Celebrity