Zsa Zsa Padilla on life after a breakup: ‘It’s a calmer and more peaceful me’

Zsa Zsa Padilla admits she was angry after calling off her engagement earlier this year. 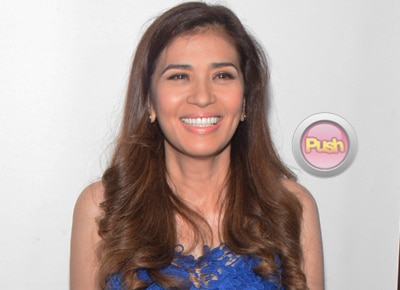 After calling off her engagement with architect Conrad Onglao, Zsa Zsa Padilla admitted that she went through a period of being angry at her ex-fiance even though she refused to give more specific details on the reason behind it. "I have a lot of Christian friends who’ve lent me books and helped me stay positive because of course in the beginning of a break up you have a lot of questions, you have a lot of anger in you, you go through phases and I’m glad na parang by God’s grace that that period has mellowed (laughs). It’s so hard to be angry din eh kasi parang it’s exhausting. It’s really exhausting. Because when you break up you’re angry. That’s the normal thing. Of course everyone knew that I was the one who left di ba? You leave because things are not working out di ba in your relationship so there. I just want to leave it between the two of us because huwag na lang (laughs),” she said during the Neurobion Helping True Heroes launch presscon held last June 27 at BGC.
The 52-year-old actress admitted that after what happened, she does not want to be as open about her personal relationships anymore with the media. "Kasi di ba I’ve made a pact na not to talk about my personal life so much? Kasi sabi ko oversharing is not good. Kasi sabi ko naman even nung panahon namin ni Dolphy he’s always been open so I though that was the way. I forgot to keep some things private and with social media now di ba you’re always posting and posting. You're always naman posting good memories siyempre (laughs). You don’t post naman when you’re crying or that you’re a drama queen or something,” she explained.
Zsa Zsa said she is not the type to erase all the memories of her and her ex-fiance which includes the photos of them she posted on social media. "Para namang bata (laughs). Di ba pag mga bata pag biglang mag-break wala na yung mga pictures. Anong nangyari break na pala sila. I’m not for that because these are things that happened to you. I’m adult enough to tell myself na, ’Hey this happened and it was an experience.’ That’s for me na lang to keep whatever it was. It’s there. I don’t want to touch it anymore,” she explained.
The Neurobion celebrity ambassador said she has a routine which helps prepare her for the day ahead. "What I do regularly now is pray in the mornings and while I’m having my tea kasi or my coffee that’s when I pray and then I meditate and then I read the bible na now. After morning prayers, I meditate because I’ve learned that when you want to speak to God it’s like you’re praying. But when you meditate it’s when you listen to what his message is for you. So you have to listen not only with your ears but see with you heart. So these are the things I learned. I’m peaceful I think because of the routine I have now,” she said.
With her kids being very supportive and nurturing to her, Zsa Zsa said she is happy to be feeling better both physically and emotionally now. "It’s just that also when that happened I was s sick. I was really physically sick. Sabi ko talagang bumigay na yung katawan ko from all the traveling also and all the stress I guess. And of course keeping up a brave front is not easy because it requires a lot of energy. Of course working on a soap is not easy. The hours are really long,” she added.
There is also a positive side to everything according to Zsa Zsa. "You know when you’re tested, when you go through difficult things in life, that’s what happens to you. You just hold on to your faith. Not that you’ve lost it but sometimes di ba medyo parang hindi mo siya masyado nabibigyan ng priority. So I think that’s the upside and that’s what you see kasi it’s a calmer and more peaceful me.” Zsa Zsa shared she will also be going on a one-month vacation after celebrating Dolphy’s fourth death anniversary on July 10.
Celebrity