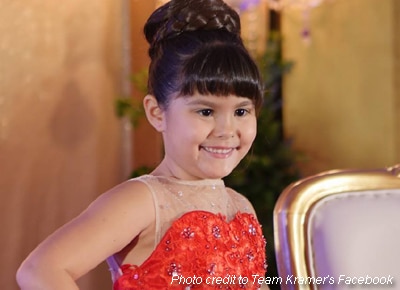 Team Kramer’s family and friends gathered together yesterday at Kendra Kramer’s 7th birthday party celebration held at Blue Leaf Pavilion at McKinley Hills, Fort Bonifacio. According to Doug, Kendra’s dad, they wanted to do something special for their eldest daughter as she reaches another milestone.
“We were trying to achieve something different, kasi we didn’t have any party for the past two years for Kendra so parang we were just at home, there are times that we were just in the play area. Pero for now you know Kendra was very much involved in the party, kinilig siya nong nalaman niyang we’re gonna have the party where mama and papa got married,” Doug said in an interview with the press at the event.
The celebration was seen via Facebook Live, which according to Cheska was for the fans to also be part of the celebration.  “I mean part of the success of Team Kramer was of course because of the fans and everyone following [us] ever since Kendra was still a baby tapos Scarlett and Gavin so para they won’t be left behind we decided to go Facebook Live and Snapchat and we will also post on Instagram so that everybody will also be part of it,” Cheska stated.
On Cheska’s birthday wish for her daughter, she told Kendra “My birthday wish for you is that you’ll always be a good girl and be obedient and how can you be obedient and follow mama and papa is you love God first then everything follows when you love God first and then you learn how to be obedient.”
Doug added, “For me we do our bible devotions every night, for me if Kendra grows up to be a Godly child everything will follow, that’s my wish for her.”
With numerous fans they have earned for the past couple of years, did they expect that their kids especially Kendra to be very popular at such a young age? “For us everything was a beautiful accident. We didn’t plan Team Kramer, we didn’t plan this social media success but you know that’s the beauty of it we didn’t plan anything it’s vey natural, it’s very organic and I think that’s why the kids are very endearing to the fans. These three kids are the stars of team Kramer.”
With their kids being part of the social media world, the parents were asked how they protect their kids from bashers and negativity online. Doug responded, “Actually up to this day naman our pictures are very family-oriented so if you got through our social media you rarely see any bashers because we are a family that promotes happy family, tight-knit family, happy marriage so parang it’s hard to find haters. There might be a percent or two in there pero hindi eh everyone’s just happy.”

Super big hit in the party, are the talented princesses from @clowningaroundmnl! Wow! Must have for every little girl's party! Thanks so much ladies!! ??????

No I don't sing, I'm not a singer. But I will sing for you baby coz you asked me to! I love you! (Will post the video tomorrow) ??

#kendrasuperstarat7 May you grow up to be a woman after God's own heart! ????