Jadine on performing with international artists: ‘We're so proud to get this far’ 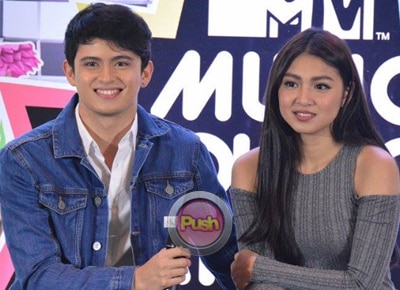 In a showcase of the best musical talents from all over the world, MTV once again staged its annual Music Evolution concert in Manila for the second year in a row. Apart from this year's mix of international acts like OneRepublic, Far East Movement, Bebe Rexha, Korean girl band A-Pink, local talent was represented by father and son Gary and Gab Valenciano and the hot love team of James Reid and Nadine Lustre.

Fresh from their recent world tour, the two talked about the difference between local and international audiences. "Well it's really not that much different. It's really not. At the end of the day they're all still Filipinos and so it's like bringing the whole Filipino community of Calgary, San Francisco, and New York so it's really not that different. It's amazing to be able to greet all our fans and followers of On the Wings of Love and those who love our music so that was an amazing experience," James admitted.

If James described his journey in showbiz as an unexpected path ever since he won in a reality show, Nadine saod there was a time she thought she would leave the industry when she was still a member or an all-girl teen singing group PopGirls "I was already studying. I mean I probably was going to quit showbiz but then Diary ng Panget happened. Pop Girls was a stepping stone for me. I was still studying at that time. All our outfits were so colorful, sobrang the dances were cutesy. I guess I've matured now. I guess I'm a little more serious now," Nadine shared.

When they found out they were invited to perform at the major concert, the couple felt happy to get the chance to showcase their musical talents to their fans and members of local and international media who were covering the event. "It's amazing," Nadine said. James admitted he was prepared to get star struck by one of his favorite performers. "I was happy (when we got invited) and then when I heard OneRepublic was coming with other international artists I literally freaked out. I was so excited for the OneRepublic guys. Of course (my favorite artist in the concert is) OneRepublic I can't deny it. I'm really psyched to see them and my personal idol Gary Valenciano. But this is a very big step for us so we're so proud to get this far and to perform among international artists and to be recognized as among the best in the Philippines," he added.

Being together almost everyday on and off camera, the MTV Music Evolution performers said that they get along well even when it comes to their taste in music. "Yes we do (have the same taste). Mine is more R&B and hiphop, Nadine is more of indie. It's really more pop. I don't know but I feel like when we're together it's a slow R&B song," James explained.

The two also shared the same feeling of stage fright when performing in front of a crowd. "Yes I do, every time. Well maybe it's because I want to do good that's why I get nervous but when I go on stage it goes away," Nadine said. James said the nervousness he feels actually helps him put more effort in giving a good performance. "I still get butterflies in my stomach but once you feel the adrenaline it helps me," he added.

As a love team, Jadine also shared their biggest assets as performers which help set them apart from others. "As a musical artist I think it's the fact that we can also dance. That helps a lot because it gives us that much more energy on stage. But other than that, it's also because of our following. Our fans are amazing," James said.