Carla Humphries talks about taking on her most daring role in showbiz. 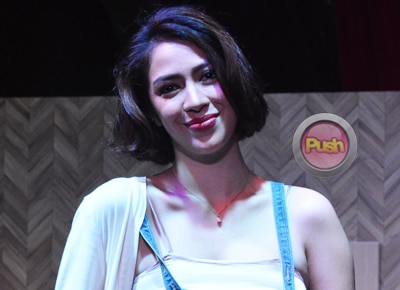 Last seen in the movie Felix Manalo which was shown last year, Carla Humphries admitted she is excited to work on her current movie project which is produced by the same company that did the historical epic Heneral Luna. "I’m doing a movie with Artikulo Uno. It has a wonderful cast and it’s directed by Raya Martin who is very well known in the festival scene. It stars Sid Lucero, Nonie Buencamino, and Bembol Roco. Ako lang yung babae so sobrang nakakataba ng puso that they handpicked me to be part of the movie and after the reputation that Heneral Luna created for Artikulo Uno, I think this is going to be an exciting project. I think it’s the first of its kind. It’s actually a book that was a bestseller produced in New York written by a Filipina based in Singapore,” she shared during the Gola footwear collection launch held last June 21 in Makati city.
Carla said it is her most major movie role to date and her most daring one as well. “Unlike Heneral Luna, it’s not going to be historical. It’s a psycho thriller. We started filming since first week of June and we’ve had locations like dump sites. It’s all shot in the Philippines. Sobrang ganda ng cinematography. I think it’s going to be a really good film. I think this might be the role I’ll be known for. I do show side boob here (laughs). I show a little of my butt and my side boob,” she admitted.
When it comes to her personal life, Carla said she is now happily dating a non-showbiz traithlete. "Well, let’s just say he’s training me on all aspects. We’ve actually been friends for years and then biglang na-develop kami. He’s Pinoy pero hindi siya mukhang Pinoy. Mukha siyang Armenian at Spanish and German,” she said.
With her close friends Georgina Wilson and Solenn Heussaff recently tying the knot, Carla said she was feeling the pressure to cope up before. "The thing is, people don’t know that a lot of my friends are a lot older than me so they’re already in their 30s. So it’s just like they’re graduating and I’m still in school of life which they are too. Siyempre at first when I was in Europe to attend George (Wilson) and then Solenn’s (Heusaff) wedding parang it was kind of like the pressure was on. Even if you weren’t like thinking of marriage all of a sudden it’s a factor na. And then when I got home, I realized there’s so much I want to do and I want to be selfish a little longer before anything and I think there’s so much I want to reach before marriage enters the picture,” she explained.
After attending Solenn’s wedding in France last month, Carla said she wishes the best for her best friend. "But I’m so happy that they ended up with each other. Especially Solenn who’s one of my best friends. I’m so happy she ended up with Nico and it gives me up that there are good guys out there and I’d rather just steady lang ako and prioritize other things and the right one will come along and true enough now I’m dating a really nice guy who’s supportive of everything I do. And I’m supportive of his triathlon life so it’s good. It’s healthy and it’s encouraging,” she added.
Celebrity