Christian Bautista plays his dream role on stage this year

Christian Bautista plays the composer of the hit song, ‘Can’t Take My Eyes Off of You’ in a musical. 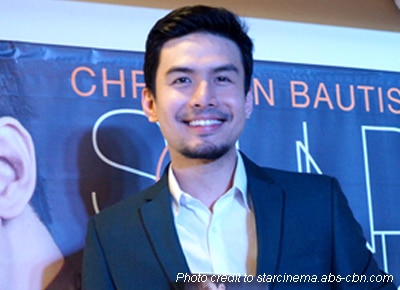 After performing on stage in 2014 in Ghost the Musical, Christian Bautista was excited to confirm that he has been tapped to be one of the lead stars in the local adaptation of the Tony award-winning musical Jersey Boys which will be staged by Atlantis. "I’m excited for Jersey Boys, I’ll be with Nyoy Volante, Markki Stroem, and Nino Alejandro so sing and dance siya. I think they chose the four of us and I think fit lahat kami sa role namin. Director Bobby Garcia chose us well. It’s the story of Frank Valli and the Four Seasons. Sa September yan sa Meralco theater. We start rehearsals sa August pa. I watched it abroad sa West End,” he shared during the Watsons Switch and Save presscon held last June 14 at the Makati Shangri-la hotel.
Christian said playing the role of Bob Gaudio, the composer of the hit song “Can’t Take My Eyes Off of You’’ was a dream come true. “My god natuwa ako nung nalaman ko na yung role ko pala nagsulat nun. Jersey Boys is a Tony award-winning musical tapos it’s hard kasi it’s sing and dance and act and para siyang may reality element na ang daming mga monologues. Marami siyang facets. Challenging sa akin kasi may dancing (laughs),” he admitted. Christian said he has always enjoyed doing musical theater. "That’s where I started naman talaga. A few years ago I did Ghost, Cinderella, and West Side Story so it’s part of me talaga ang music,” he added.
The Watsons Oral Care line endorser also said he is also open to opportunities of working abroad in the future just like his fellow artists Mark Bautista and Rachelle Ann Go who performed in London’s West End. "I’m planting seeds. If it grows into something wonderful then yes. If it doesn’t, then at least I planted some seeds and I tried and hopefully it works out. I’m expecting the best and if it doesn’t then it’s okay. At least na-try ko,” he said.
Celebrity