Gary Valenciano says he will welcome his first grandchild before the year ends. 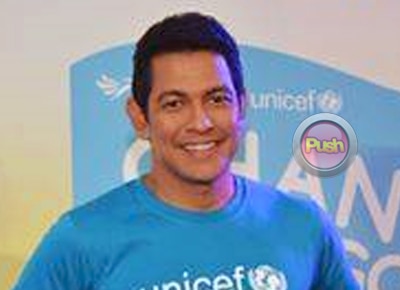 As a UNICEF national ambassador, Gary Valenciano admitted he was more than happy to be part of the launch of the Change for Good program which is a global partnership that allows Cebu Pacific airlines to invite their passengers to make a donation to help fund UNICEF’s 1,000 Days Health and Nutrition program. "I feel good because I know this is going to have an impact on the children and it’s going to have an impact on many of those who want to get involved or who are looking for a way to get involved in doing something good for children in need,” he said during the Cebu Pacific-UNICEF presscon held last June 16 at the Crowne Plaza hotel in Ortigas.
Recently, Gary's eldest child Paolo announced that his wife was pregnant last May. The younger Valenciano captioned on his Instagram post that his dad Gary V. would now be called “Lolo V.” Gary V admitted he and his entire family are excited for the arrival of their newest member. "For Father’s Day, I’m just waiting to become a grandfather which is very soon. I think sometime in November. But I will [tell] all the media here right now, please (may I have your) attention. Lolo is not applicable to me. It’s Papi. So it’s Papi Gary V. Master Papi Gary V. No, Lolo Papi Gary V. Kasi my grandfather from my mother’s side was called Papi hindi lolo hindi grandpa. I kind of like that so okay lang,” he shared.
Even though he’s only turning 52 next month, Gary said he feels nothing has changed about him physically and mentally as he prepares to be a grandfather for the first time. "No, nothing has changed except the fact that I’m glad that it’s actually going to happen. Because at least I’m still young enough to run around with my grandchild, whether it’s my granddaughter or grandson. Actually sa totoo lang, iniba ko ng konti yung itsura ng bahay kasi I want my grandchild to spend time there. I will encourage the mama and the papa to work all you want. Okay lang but make sure you leave the child here at home with me. And I’m looking forward to it. It’s a good chapter in my life that I’m looking forward to,” he admitted.
Gary shared how his son Paolo is coping with the news. Unlike Gary who had Paolo when he was just 20, the ASAP singer says his son is mature enough to become a dad at 31 years old. "I don’t think he’s prepared yet but that’s okay because he’s like his papa. I was not prepared for Paolo and so I can go up to him and congratulate him, ‘Welcome to the club son!’ I was not prepared. But the thing is he seems to be very excited. They have a dog named Trooper and he practices all the being lambing with that dog all the time. And you can tell that the couple is quite excited about this. I mean who wouldn’t be?” he said.
With the big change happening in their family this year, Gary said he is looking forward to the opportunity of helping raise his first grandchild. "I think it’s a change for good because number one maybe I’ll practice on that child what I’ve never been able to practice with my sons. Remember I was very young. So there were a lot of things that I wanted to do. I would go to the beach with my sons and they enjoyed it. But there are other things like sitting down and talking to the child more and spending more meaningful moments with the child, especially in those first 1,000 days which we all know now are the most important days,” he said.
Celebrity