EXCLUSIVE: Andre Paras considers dad Benjie his best friend: ‘I tell him everything’ 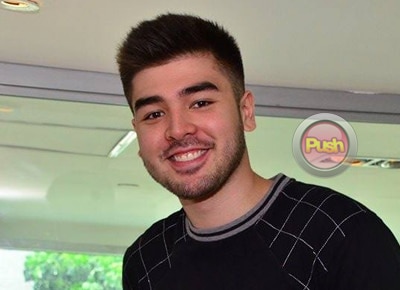 As one of the local VJs for MTV Pinoy, Andre Paras admitted he is excited to host the upcoming MTV Music Evolution Manila concert on June 24 along with fellow VJs Yassi Pressman and Hanli Hoefer. The concert brings together acts from all over the world like Far East Movement, One Republic, Bebe Rexha, K-pop group Apink as well as local acts James Reid, Nadine Lustre, and Gary Valenciano and will be staged on June 24 at the SM MOA concert grounds. During the MTV mini-presscon held last June 17 at the M Cafe in Makati city, Andre shared that this year’s theme will be dance music.
Before the big concert, Andre said he looks forward to spending Father’s day with his dad Benjie Paras on June 19. "We’re going to spend time with dad and hopefully just have a normal family lunch and then dinner. Hopefully we get to spend the whole day with dad. It’s important. I usually have work during weekends but thankfully this Sunday is all free so all day I’ll be with my father. My brother Kobe is in the States right now. He’s going to finish up his school there. He just graduated high school so he’s on the way to college already so it might take another four years before he comes back,” he shared.
Just like his dad, Andre said they share more than just a mutual love for basketball and acting. "I think it’s our passion in entertaining people. Our passionate way of just being us. I guess we like having a good time and we just can’t keep it to ourselves, we have to express it to people like my dad kahit off camera he makes people laugh or he gives advice or he’s just being himself. That’s why people love him so much. I can’t wait for a time when I’m able to express myself as an artist like him. As an artist, I’m thankful that we’re both similar people and happy at the same time being good role models,” he explained.
Having grown up being close to his dad, the 20-year-old MTV VJ  admits there is more to Benjie Paras than just being a good athlete and funny man. "What people don’t see is that on TV he’s always happy and funny of course at home he’s the same but when it comes to becoming a father, he doesn’t naman scold us or tell us what to do. He tells u, ‘You have to study hard and you have to work hard.’ There’s a part of him that’s really serious. People think he’s just joking around. He’s a really serious person,” he revealed.
Even though his biological parents separated when he was still young, Andre said his dad is the closest person to his heart. "I would describe my dad as ‘the main man.’ He is the provider of the family. Before we had work he was there to provide for us. I consider my dad as my best friend. Of course I respect him as a father but we’re close as best friends, I tell him everything, my secrets. I’ll ask for advice and at the same time joke around with him and have fun. I know he’s like 47 or 48 already but he still has his youthfulness in him that’s why we get to click a lot and hopefully it shows even on-cam. Since we’re in the industry hopefully we can have more shows together and movies that we can do,” he said.
In fact Andre can’t imagine going through life without his dad’s love and support. "Maybe during those difficult times I might have been influenced by those difficult times. I might give in. But thankfully my dad he taught me what’s right from what’s wrong. He taught me which path to go to. He more of took the hardships, all the blood, sweat, and tears from when I was being young, makulit, and not listening to him until when I started listening to him. So it was all worth it for him I have to say. It’s because of him that I am who I am,” he added.
Unlike others who don’t want to follow in their parent’s footsteps, Andre said he has no problem listening to his dad’s advice. "I’m proud to say I’m following in his footsteps because there is nothing wrong he did and I’m proud of that. I’m proud to say that there’s nothing bad you can say about him. What I learned more from dad in general is to be yourself and to keep saving up. When it comes to be yourself, hindi sa pinapabayaan niya ako because he knows that he raised me right. So by being myself I am like his half, I am like my father’s son. So he trusts me a lot. Whenever I tell him that I’m going out he doesn’t tell me to come back at this time and automatic I’d go somewhere safe with my friends and update him a lot and be home before the curfew,” he explained.
Even when it comes to girls, Andre said he trusts his dad’s instincts. "He just tells me to make sure the person understands what you’re doing, your work and at the same time she has a goal in life which is school. Dapat number one yung goal-driven. Sabi niya dapat hindi ako yung number one nung girl and dapat ako hindi ko siya number one priority. It’s just going to mess things up and that makes sense to me. Kasi kung may forever nga you have to understand each other,” he said.
Celebrity