Elmo Magalona on being destined for Janella Salvador: ‘We found each other already’

Elmo Magalona talks about his chemistry with Janella Salvador 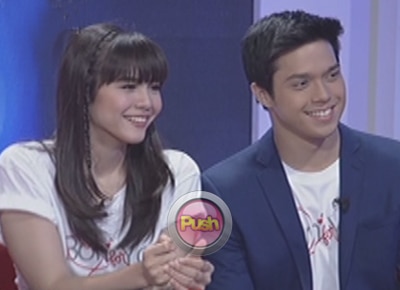 On Tonight with Boy Abunda, the stars of the upcoming teleserye Born For You, Janella Salvador and Elmo Magalona, had a ‘red string of fate’ attached to their pinky fingers.
Elmo explained that according to Japanese folklore, “When we’re born, we are destined for someone else who is also wearing an invisible red string on their pinky finger.”
“The end of your red string is supposed to be the person you’re destined for,” Janella added.
“So you’re not in search anymore of your destiny because you are already connected to each other,” Boy Abunda commented to ABS-CBN’s newest teleserye pair
.
“We found each other already,” Elmo replied.
Boy had to clarify whether or not they’re officially a couple, to which Elmo said, “Kevin and Sam are destined together,” referring to the characters they play on their first drama together.
Janella further shared, “Feeling ko, destiny depends on fate but it also depends on when you make a choice. You have to make [the choice].”
On whether or not they feel pressured to be a couple, Elmo said, “I truly believe in what we have to offer on Born For You. I don’t think we have to be a couple as of now to show the people that we have that chemistry going for us.”
“Plus, we just got to know each other just months ago,” Janella remarked. “Right now we’re just enjoying what we’re doing.”
“I’m super blessed to be in this show, and to work with Janella for my first ever show in ABS-CBN,” Elmo further stated.
During the segment Fast Talk, the onscreen couple was asked, “Is there a possibility that you guys would realize that you were actually born for each other?”
“There’s a possibility,” Janella responded, while Elmo said, “Yes.”
Celebrity