Robi Domingo: 'I want to be like the Rico Yan of hosting'

Robi Domingo shares what brand of hosting he wants to bring into the biz. 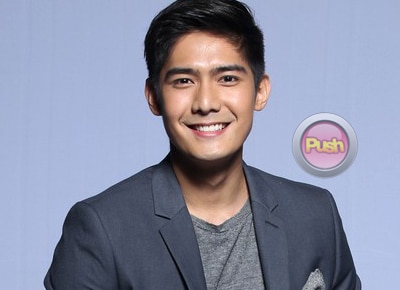 Robi Domingo was asked about his reaction to people saying that the he is the next Luis Manzano of hosting. In an interview with the press, the TV host remarked that he is flattered by such compliment.
"Sobrang kinikilig talaga ako kasi when you say Luis Manzano. He is the—parang ngayon ha—he is the host of all hosts. After one program di ba pagnawala lang isang linggo, after one week nandon na naman siya sa The Voice so it's really good. Nakakatuwa na you're called one of the premier hosts of this country. But at the same time ayaw ko sanang gasgasin ang term na 'yun dahil props to kuya Luis he has his own brand, sobrang nakakatuwa."
He added that he also wants to be the "Rico Yan of hosting". He explained,  "Parang ang gusto ko ngang mangyari I want to be like the Rico Yan of hosting, you know, 'yung swabe. When you say Rico Yan, di ba he is well loved by everyone and he's really known for acting pero I want to bring that idea back, I want to have Rico Yan back in hosting parang ganon."
Besides from hosting, is he going to have an acting project soon? "Wala pang acting but from what I heard there's gonna be a sitcom pero hindi pa sigurado 'yun."
The TV host was asked how he manages a thriving relationship with Gretchen Ho despite the fact that both of them are busy and time may be an issue.
Robi responded, "Kasi once you really explained it well huwag ka lang siguro gagawa ng masama. May iba kasi 'Ay di tayo pwede magkita kasi may taping ako,' pero nasa ibang lugar pala. So about schedules naman we are really transparent, alam ko 'yung schedule niya, alam ko 'yung schedule ko."
Celebrity