EXCLUSIVE: Model-turned-vlogger Wil Dasovich admits he has a crush on Maja Salvador

Model-turned-vlogger Wil Dasovich shares why he only wants to date Pinays. 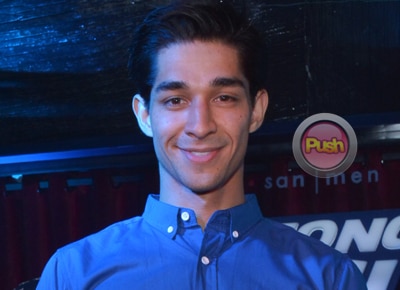 As ABS-CBN Lifestyle’s travel and vlogging expert, Wil Dasovich admitted he never expected to be where he is now after arriving in the country in 2014.
“It’s kind of crazy the path I took here and I’m just really grateful to be at this moment and it’s really unbelievable. I’m a businessman, an entrepreneur. I focused on entrepreneurship and marketing so before I came to the Philippines. I started my own house painting business which was going very well.
"And then once I got to the Philippines, I got this opportunity. I got scouted in the mall bigla for modeling and I tried it out and then tuloy tuloy yan. And then I started You Tube-ing and that blew up and then now it’s been more than two years and nandito pa ako and I just left my business and everything I knew back in the States,” he shared during his launch as Kojie.San Men’s #SaktongPogi brand ambassador.
Apart from modeling, the 24-year-old model-turned-host is best known for his popular vlogs on his YouTube channel that shows off his daily adventures.
"I shoot, I edit, I do everything. I don’t sleep (laughs). Literally everything I learned is just on YouTube. I’ve just been YouTube-ing it. But on TV and on YouTube I’m definitely a very wild type of person you know. But I guess sa tunay na buhay hindi ako taong abnoy. I’m actually a little more calm (laughs) person because everything I do now is para sa entertainment lang. I’m more of a chill guy than you’d expect,” he admitted.
Wil grew up in San Francisco but shared he has fallen in love with the Philippines and learning Tagalog which explains why he likes using deep words. "I really grew up my entire life, lumaki ako sa States. My ethnicity is half-Croatian but American ako. I grew up American. Being here higit dalawang taon, super Pinoy na talaga ako in everything I do. My mannerisms, kung anong kinakain ko, I’m even late! I’m on Filipino time (laughs), lahat.
"For the most part I’ve converted to being pretty Pinoy. For me, nakakatuwa talaga yung lengguwahe na yan and that’s the reason I wanted to learn it. I wanted to learn all types of Tagalog. My series is called The Art of Tagalog and I really wanted to break it down and explain all the different details why Tagalog is like this because I was so infatuated with the language. So yun lang. I did everything from malalim na Tagalog to salitang kalye. But it was the salitang beki video that really patok. That was the one that people loved the most,” he said.
The Kojie.San Men endorser also shared why he prefers to date Pinays over other nationalities.
“Basically ang pinaka-importante sa akin is a girl that can make me laugh and a girl that can make me smile regardless of race. Pero when I first came here sinabi ko na kailangan talaga Filipino kasi I prefer to speak Tagalog and I want to keep it up since after learning I want to continue to improve on this language. So for me isa mga pinaka-importanteng katangian ng isang babae is marunong mag-Tagalog,” he said.
Having made guest appearances on different local networks, Wil said a Kapamilya actress is his only showbiz crush.
“Si Maja Salvador. Hindi ko alam (bakit). Yung unang movie na nakita ko, I honestly forgot nakalimutan ko the pangalan of the pelikula pero she was the bida and she was with Paulo Avelino and Jake Cuenca in the movie. In showbiz she’s like one of the few people I’ve never met before,” he divulged.
If given the chance, Wil says he would not miss the chance to ask the Status: It’s Complicated actress out on a date.
"Is she single? Wow (laughs) that put me on the spot. Siguro if I had the right confidence and the right approach puwede,” he added.
Celebrity