EXCLUSIVE: CJ Navato and Kristel Fulgar reveal the real score between them 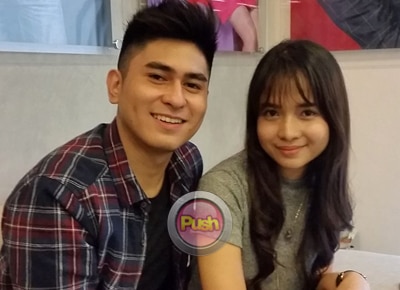 Once and for all, YouTube stars CJ Navato and Kristel Fulgar are setting the record straight about the real score between them.
Curiosity about their relationship began after fans noticed the palpable chemistry between the two whenever they do their song covers. Their most recent cover was “Pag-ibig Na Kaya” by Liezel Garcia and Bugoy Drilon.
“Malandi kasi talaga ang mata ko eh,” admitted CJ in an exclusive interview with Push.com.ph. “I’ve heard from a lot of people na malandi talaga ang mata ko.”
But he quickly explained that, “Ako kasi kapag kumakanta ako, I feel the lyrics and she’s the closest doon sa akin sa video. When you sing kasi, dapat fini-feel mo siya eh. So who else am I going to tell it to than the woman who’s facing me.”
Kristel echoed CJ’s explanation and even clarified that they are really “just friends.”
The 19-year-old singer also added that he is not courting Kristel. But they were quick to deny that they have “friendzoned” one another, even though they are often seen wearing a hoodie emblazoned with “friendzone.”
But why are they so comfortable with one another?
“Ever since kasi, like what I discovered, isa ako sa mga konting lalaki na kinakausap niya sa showbiz,” clarified CJ. “Kasi she’s very reluctant. Repulsive siya sa mga hindi niya kayang pagkatiwalaan.”
CJ believes that the fact that they grew up together proved to be an advantage why Kristel is very comfortable around him.
“Since kababata niya ako, she feels like she can trust me even if may mga downsides na medyo gamol nga akong tao,” he said.
The teen star even added that Kristel was among the few who helped him “nung time na medyo pakawala ako.”
Meanwhile, with their covers raking in thousands of hits, many are wondering what’s next for CjTel.
“Sa akin for fun lang talaga kasi enjoy talaga eh,” CJ said.
Even though Kristel agrees with CJ, she says that she’s open for whatever opportunities that would come their way.
Celebrity