Does Jodi Sta. Maria prefer a Chinoy or a Tisoy?

Jodi Sta. Maria, Ian Veneracion, and Richard Yap are thankful for the positive feedback their upcoming movie has been receiving. 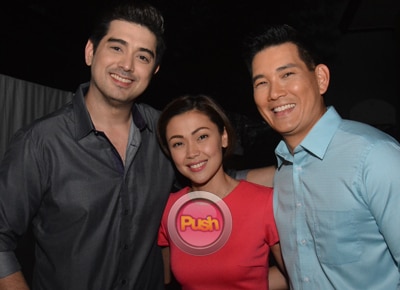 Since the release of the official trailer this week, the upcoming Star Cinema offering Achy, Breaky Hearts which stars Jodi Sta. Maria, Ian Veneracion and Richard Yap has been receiving favorable feedback.
In line with this, Jodi, Ian, and Richard expressed how thankful they were when they got to talk to some members of the press during a set visit last Thursday, June 9.
“Siyempre natutuwa kami na na-appreciate ngayon pa lang ng mga tao ‘yung hard work na inilagay namin sa proyekto na ‘to. Maganda naman din ‘yung mga feedback na narinig namin at nakuha namin from our friends,” Jodi said. Ian said he hopes that their bonding will translate well onto the screen. “We believe in the project and the script, solid ‘yung script. Ang ganda ‘nung vibe sa set and sana ayun din ‘yung makita nila onscreen,” he said.
Sharing that the cast and crew spend the whole day making “kulitan,” Ian added, “Sana ma-feel ng mga tao ‘yun pag napanood nila ‘yung pelikula.”
Meanwhile, Jodi laughed when asked about the reactions of her two male leads about being heartthrobs even to younger generation. She then revealed that Ian and Richard, who joked about being younger than their real age, would feel awkward about it.
“Nakakatuwa na there are some people who are younger who look up to us and humahanga sa aming dalawa so nakakatuwa lang. Siyempre, at our age, hindi naman namin ineexpect na we can get that kind of audience so thank you very much… Sa mga titas, all our love,” Richard said lightheartedly while Ian also said he felt flattered and thankful.
Lastly, when asked who she prefers more, a Chinoy or a Tisoy, Jodi, who joked about being the fans club president of Richard and Ian, laughingly answered, “Puwede both?”
Celebrity