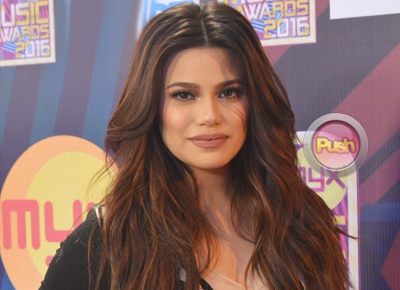 While many are getting alarmed over the intense discussions and arguments brought about by the upcoming elections, actress Denise Laurel wanted to remind people, “we are all fighting for our country.”

“Sa tingin ko sobrang ganda na passionate tayo para sa bansa natin. Us Filipinos are very powerful and I feel that power but [we have] to use it wisely,” she said in an interview during the press conference of her independent film Magtanggol together with Yam Concepcion, Ejay Flacon, and Tom Rodriguez.

She stressed that Filipinos are actually in charge of their own future, which is why it is important for the voters to choose their candidates wisely.

Another side of the Filipinos’ burning passion for this coming election is the ongoing exchange of harsh words between followers of different politicians.

To this, Denise said, “Kapag may kakilala kayo na tao na hindi sangayon sa ginagawa niyo, respect. Respect one another because we’re all fighting for the same thing. We’re all fighting for the love of our country, for our children, for our children’s children. So let’s respect one another and who we want to vote for,” she said.

However she still stressed that, “But, it’s great that everybody’s so passionate about the elections. It reminds me of ‘yung pagmamahal natin sa bansa natin at ang ganda.”

According to Denise, who comes from the Laurel political clan, she has deliberately chosen not to endorse or campaign for any candidate.

“In my family I make it a point to stay apolitical because if I say that I’m voting for someone it will reflect my whole family. Eh ayoko naman ‘yun i-impose sa kanila kasi alam ko iba-iba ‘yung mga pinipili nila. Ayoko naman i-summarize ang binoboto ng buong Laurel clan at Sanz clan,” she explained.

Does she have any plans of running for office in the future?

Magtanggol is directed by Sigfreid Barros Sanchez and will be in theaters starting May 18.