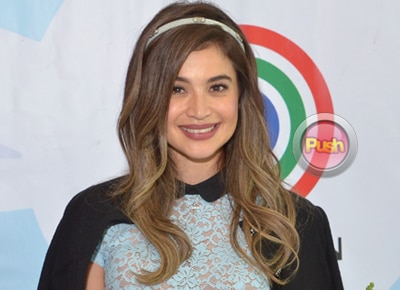 Anne Curtis posted an Instagram photo of her and Erik Matti yesterday announcing that she will be working with the director. The online world then speculated that Anne was chosen to play the role of Darna since direk Erik is slated to direct the superhero film.
In an interview with Anne during her ABS-CBN contract signing, she was quick to clarify that she will not be playing the super heroine. "No hindi siya Darna."
She remarked that the her new role though is far different from the previous characters she has played in movies or TV before.  "It's something I've never done before, sobrang, sobrang excited talaga to start filming already. We're gonna star mga July. It's definitely another side of me that I've never done before.
Anne shared that she will start her preparation for the film as soon as she gets back from Solenn Heussaff's wedding in France this May 21. "There's a lot of training. Maa-announce na 'yun siguro when I get back from Solenn's wedding. Magsta-start na ang training for that new film."
Celebrity