James Reid shares why his ‘This Time’ leading lady Nadine Lustre is the only one for him. 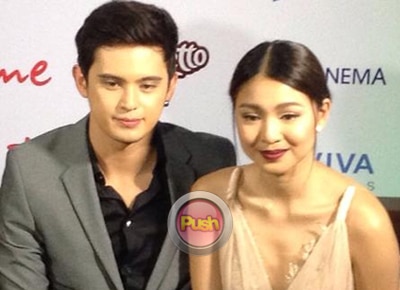 During the red carpet premiere of Viva Films’s romantic movie This Time, stars James Reid and Nadine Lustre admitted they have been working hard to promote their biggest film project to date. On their way to SM Megamall where the premiere was held last May 3, the two had just come from ABS-CBN in Quezon city. "Actually tahimik lang kami kanina kasi medyo mahaba-haba na rin yung araw namin so yung energy namin hindi na 100% pero super excited kami. Ang daming tao. Kanina habang naglalakad hindi na namin marinig yung sarili namin habang nagsasalita kaya masaya,” Nadine admitted.
After admitting their feelings earlier this year, James said their relationship has definitely grown deeper. "She’s understanding. Nadine is very maalaga kahit offcam. She’ll ask if I’m hungry and she’ll bring food and she’s always taking care of me, small things and all that,” he shared. Nadine said there are a lot of things about James that makes her very happy. "Madami eh. But then ang top of mind he’s very silly. He makes me laugh all the time. Mas silly siya offcam,” she added.
Shooting their film This Time was more fun according to Nadine because they are now a real couple instead of just playing one onscreen. "Well nothing’s changed. Ganun pa rin naman kami but siyempre pag gising namin sa umaga (ngayon), especially ako I hate waking up in the morning. Pero ang saya gumising sa umaga kasi makikita ko siya,” she admitted.
Nadine hopes fans will enjoy and learn from their latest movie. “Kikiligin po kayo at saka after niyo panuorin yung movie parang may pag-asa, parang ganun. Yun yung naramdaman ko dun,” she said. One of their favorite parts of the shoot was going to Japan. "Shooting the scenes in Japan was amazing. We both loved Japan. And the ending was one of the most fun scenes we’ve done from any movie,” James admitted.
With James’s 23rd birthday happening this month, Nadine refused to answer if she has anything planned for her Fil-Australian beau. "Malalaman niya pag nagbigay ako ng clue eh (laughs),” she says. James, on the other hand, hopes to just have a simple celebration. "I just want a quiet family dinner. I really need a break and after my birthday May 12 I leave for the States for a concert tour so I just want to relax,” he admitted.
With some people still speculating if their relationship is genuine or just for show, James said that he has found “The One” in Nadine. "Of course she is. Otherwise I wouldn’t have gone through all that,” he said. If there was ever any advice on love he could impart to his fans, James said it is to trust your feelings.  "For me it’s you never know what you really want sometimes. Sometimes it’s just right under your nose. Just give it a chance,” he said.
Celebrity