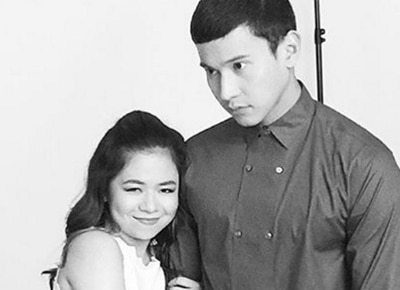 While Enchong Dee was not Kiray Celis’s first onscreen kiss, she nevertheless got affected when they were shooting the scene.
In an interview with Kiray on the set of their upcoming movie I Love You To Death, she openly talked about the increased pressure of creating a film with only one person to share the pressure with.
“Nung nagpo-promo kami ng Love Is Blind siyempre pressured ako na nasa billing ako, na nasa poster ako pero alam mo ‘yung  feeling na ‘Kapag hindi ito kumita hindi naman dahil sakin dahil hindi naman ako ang sikat dito. So kapag hindi nila ito nagustuhan sabi ko, ‘Ay isisisi nila ito sa iba kong kasama!’” shared Kiray.
The young comedienne was talking about her first-ever leading role in movie with Solenn Heussaff, Derek Ramsay, and Kean Cipriano, which also took over the box office.
“My God dito, ang sakit sa puso! Parang kapag dalawa lang pala kayo kapag hindi binigay nung isa parang kulang ‘yung isa. So kailangan talaga hindi kayo nagsasapawan. Okay kayo sa isa’t-isa, ganon,” said Kiray.
While it can be “fun” for only two people to carry the burden of a film, Kiray admitted “Mahirap pala kapag dalawa lang kayo.”
Even though she has worked with her new leading man Enchong in the past, Kiray said their upcoming film has got her experiencing a number of interesting things.
Among them was discovering that Enchong apparently has broad shoulders and that he’s really the “clingy and touchy” type.
Kiray even jokingly presupposed that his “sweet nature” was probably the reason why the people with whom Enchong had previously worked with end up falling for him.
Meanwhile, Kiray shared that she was able to showcase a number of things on I Love You to Death that she has not done in Love is Blind.
Celebrity