Is Rica Peralejo willing to return to acting?

Rica Peralejo, who has now devoted her time to being a mother, wife, and blogger, shares why she usually says no to acting projects. 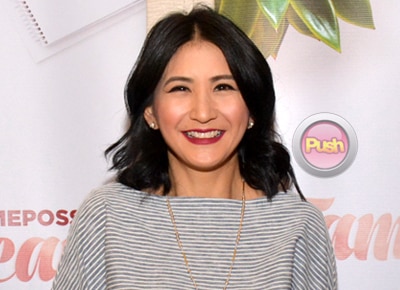 It has been years since we last saw Rica Peralejo-Bonifacio act on the big and small screens. Now a wife to Christian pastor Joseph Bonifacio and a mother to their two-year-old son Philip Nathaniel, Rica ventured into blogging in 2012 which keeps her busy nowadays.
Last Saturday at the Fairmont Hotel in Makati, Rica met with some members of the press as she talked about her project 100% Whole Mom which she launched together with fellow mothers celebrity Cheska Garcia-Kramer and interior stylist Marilen Faustino. Earlier during the press conference, Cheska and Marilen revealed that at times, Rica forgets that she is a celebrity.
Confirming this, Rica shared, “Oo, I really tend to forget because I like being normal. Maybe that’s one of the reasons why I like to travel a lot because I like normalcy. I’ve been in the business for more than 20 years but I really don’t feel comfortable na parang hinahabol habol ako kasi I really feel like, ‘bakit niyo ko hinahabol? My gosh, parang ako lang kayo, ganyan.’ So I still cannot resolve that within myself and that’s a very different thing from the crafts or the gifts that God has given me like I can act, I can sing…”
Is she open to returning to show business?
“Maybe if for a good project, I can do movies but it has to be a really good project or even TV. A TV show, talk show is good. I don’t have a problem with that kasi madali lang ‘yan sa’kin. The primary concern kasi for now is scheduling. If it doesn’t fit with the schedule of my family, then I really can’t do it. So family is first, that’s the reason why I’m usually saying no to these things,” she said.
Celebrity