Paulo Avelino denies rumors that he and Bea Alonzo are dating. 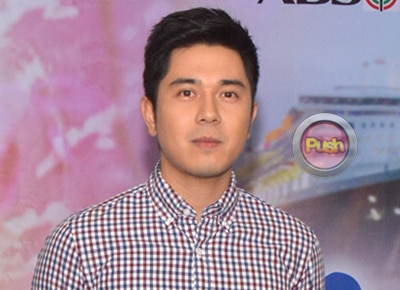 Actor Paulo Avelino thinks that KC Concepcion deserves to be happy especially now that she’s dating anew.
Paulo made the comment about KC during the press announcement of his upcoming soap The Promise of Forever together with Ejay Falcon and new Kapamilya Ritz Azul.
A couple of days ago, Paulo shared a video of the song titled  “Loving Someone” on his Instagram account. Netizens immediately associated the post with KC.
To this Paulo said, “I really do share a lot of songs. With friends or with family, well yeah pero ang ganda lang nung kanta.”
He also denied that he posted the song because of KC.
Paulo said he and KC are ‘okay’ but was rather noncommittal when asked if they are still communicating. He did mention that they recently saw each other at an event.
KC recently admitted to dating Azkals member Aly Borromeo and reports had it that he was even present at the 20th wedding anniversary of her parents Sharon Cuneta and Kiko Pangilinan.
What does he think that KC is back in the dating game?
“Okay, well she deserves to date someone else and be happy. Everyone deserves to be happy. Everyone deserves to maybe find what they are looking for,” he said.
Meanwhile, Paulo was also quizzed about earlier reports that he was spotted “dating” Bea Alonzo in Singapore.
“No, no. ‘Yung nangyari no’n kasi my Singaporean friends invited me pero si Bea, Enchong [Dee] and Ate Monch (Novales) of Star Magic pumunta sila ng Sunday ata ‘yun so nagkita-kita kami ng Sunday,” he explained.
Paulo maintained that it was not a date and that he and Bea are just friends along with Maja Salvador and Enchong.
Despite being single, Paulo reiterated that he is currently happy.
“I’m single. I have no plans of seeing someone I don’t know when pero hindi naman natin masasabi so time will tell,” he ended.
Celebrity