Zoren Legaspi and Carmina Villaroel’s daughter Cassy says she is not affected by online bashers. 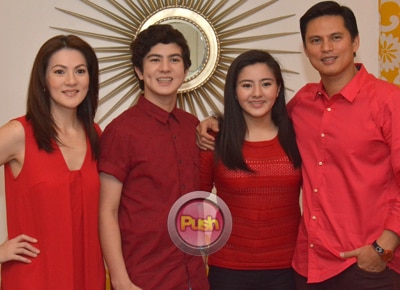 When Darren Espanto admitted in an interview that he had a crush on fellow ASAP performer Cassy Legaspi, fans of the teen singer reacted in different ways. Some showed their support by coming up with their combined name “CassRen” while others who did not approve made their feelings known through comments online.
Mom Carmina Villaroel said she would rather block negative followers. "Kasi yung pamilya namin very peace-loving people. Ayaw namin ng may kaaway. Basta as long as your conscience is clear, as long as wala kang inaapakang tao just don’t mind it. May mga issues na kailangan mo na lang deadmahin, mga issues naman na kailangan mo talagang komprontahin where you really have to explain and defend yourself. So lagi naming pinapaalahanan sa kanila na it’s really a case-to-case basis. Ang importante you know the truth, you know yourselves, you know our family. Ang importante nakakatulog kami peacefully at night,” she shared during an intimate interview with Push courtesy of Jollibee last May 2 in Quezon city.
Dad Zoren Legaspi said there’s no need to fight back. "Well it’s part of it. Nature yan ng social media eh. So hindi ka dapat magkaroon ng violent reaction actually. Kung meron kang right na mag-post, I guess yung followers mo may right din na magsabi ng kanilang opinyon whether hindi maganda or maganda, whether degrading, you just need to learn to accept that it’s part of the game and to be good at it in this game, you should know how to just turn your back and move on with your life ganun. Ako kasi minsan mino-monitor ko yung mga Instagram ni Mina and I would tell her na pag may sinabing ito kaya i-block mo na lang. it’s that simple you know. Hindi mo naman kailangan makipag-word war sa kanila eh,” he explained.
Cassy’s twin brother Mavy admitted he had to stop himself from responding to unfair comments about his sister. "It’s me actually (who wanted to react). I’m the one who usually wants to engage with the people pero I learned na just to not mind it and to just move on because usually I tell them what I want to say but they say no that I shouldn’t say that,” he shared
After Darren’s admission, Cassy said she and the teen singer have remained good friends. "I don’t really have a problem with it because that’s Darren’s thing so yun nga it’s fine. He’s really nice and very talented,” she explained. But to her online critics, she said that she hopes they would refrain from making negative comments. "Sana they can keep it na lang to themselves but you know you can’t really control anyone so just let them say what they want to say. Yun na nga if it’s bad or if it’s good,” she added.
Even though the twins only turned 15 this year, Zoren said they have allowed them to nurture friendships like Cassy with Darren and their other showbiz friends. "Actually meron silang group chat so nagkakamustahan sila dun. Dun mo mapapatunayan din na okay yung grupo dahil nag-uusap usap lang sila dun yun mga friends nila. Eto nga lagi rin kausap si Darren. Because of ASAP kasi kaya nagkaroon ng ganung group. Kasi yung age nila hindi nagkakalayo eh,” he explains. Mavy also agreed with his dad on their opinion of Darren, "He’s a good guy actually. He’s very kind.”
Celebrity