EXCLUSIVE: Darren Espanto says he is happy being friends with Cassy Legaspi 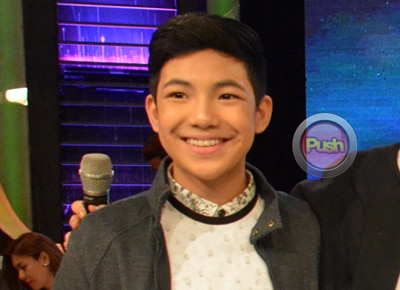 After participating in the recent Star Magic Games, Push.com.ph spotted Darren Espanto hanging out with his fellow artists who enjoyed a whole day of fitness and camaraderie. "Masaya naman. Ako yung naging captain nila sa team so masaya naman talaga,” he said.
The 15-year-old singer also had good news to share about his career. "I just released my second album last May 20 and nag-number two siya kaagad in the first 30 minutes to one hour I think. Sabay kasi kami ni Ariana Grande kaya I was surprised na mag-nu-number two ako eh. I felt very happy kasi number two is a big thing na and I felt blessed. On June 25 I’m having another major concert at the Kia theater naman,” he told Push.
With his continuing success after his stint on The Voice Kids two years ago, Darren said he doesn’t ever want the popularity to get into his head. "It’s all just about knowing who you are at the end of the day and just being yourself and staying humble I guess,” he admitted.
Apart from being a good performer, Darren hopes to fulfill his other dream by the time he turns 20. "Siyempre gusto ko rin maka-graduate ng school. Hindi ko pa alam anong school pero siguro Nursing or Medicine. Hindi ko pa rin alam kung dito or sa Canada mag-aaral, tingnan muna natin,” he added.
Netizens have been clamoring for him to give an update on his friendship with Cassy Legaspi. They have even dubbed their tandem #CassRen which Darren is very much aware of. "Nakakatuwa sila kasi when Cassy and I first met, we were talking about #CassRen and we were talking about how crazy the fans would go once we posted our first selfie together,” he said.
Even though he and Cassy only get the chance to see each other every weekend during ASAP, Darren said they have kept in touch online via group messages. He also feels happy that Cassy’s parents Zoren Legaspi and Carmina Villaroel have been very nice to him. "Okay naman po. They’re nice people. I feel humbled and masaya rin na they had nice things to say about me,” he said.
With his family still based in Canada, Darren said he always looks forward to visiting them there whenever he can. “My friends over there still treat me the same and that’s what I like about my friends and my family there. I guess yung mga Filipino lang dun kilala na rin ako pag nag-mo-mall, ayun pero yung pamilya ko they always treat me the same way. When I’m at home I like to edit music and make blogs and I like to travel. I like to sleep (laughs) and I do homework,” he admits.
This year, Darren hopes to see more of the world as a performer. "I want to go to Europe. Hindi pa ako nakakapunta. Wala pong nag-bu-book dun pero pag may chance I want to go to Paris or Rome. Pero mostly sa Rome kasi mostly it’s such a historical place,” he shared.
Celebrity