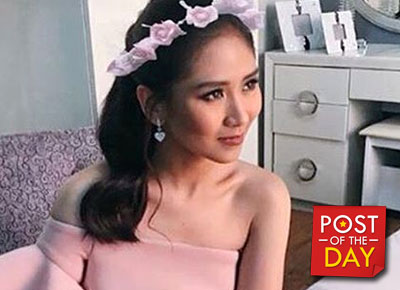 Fans of Popstar Princess Sarah Geronimo were saddened when it was announced on Wednesday, May 25, that she won’t be performing in this year’s MTV Evolution Manila.
“We are disappointed that due to medical reasons, [Sarah] can't perform at #MTVMusicEvo. We wish her a fast recovery. Health comes first!” MTV Asia wrote on Twitter.
Aside from Sarah, Kapamilya stars James Reid and Nadine Lustre are also set to perform in the music fest.
On the same day, MTV Asia also announced on Twitter that American singer-songwriter Bebe Rexha and Korean girl group Apink were added to the lineup for the said event.

Bebe is known for her collaboration with American rapper G-Eazy where their song “Me, Myself and I” hit number 1 on Billboard Hot Rap Songs. She also released “No Broken Hearts” featuring Nicki Minaj. This is her first single in upcoming debut album.
Members of Apink are Park Cho-rong, Yoon Bo-mi, Jung Eun-ji, Son Na-eun, Kim Nam-joo, and Oh Ha-young. They are famous for their songs “Remember” and “Let Us Just Love” to name a few.
Celebrity