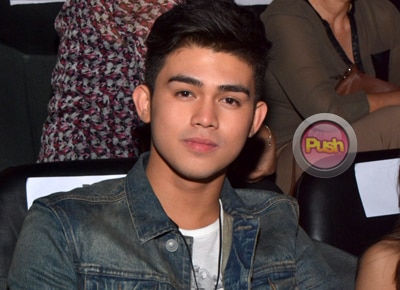 Young actor Inigo Pascual said that he is very proud of his father Piolo who is the lead actor in the Star Cinema movie, Love Me Tomorrow which premiered last May 24, Tuesday at the SM Megamall Cinema 9.
READ: REVIEW: Here are the five things you shouldn’t miss when you watch ‘Love Me Tomorrow’
Inigo, who attended the premiere night, lightheartedly told members of the press, “Ang masasabi ko, grabe si Papa P… Any age is papa eh. Bampira na si papa so I’m just really amazed.”
Inigo also shared he was on the set during the production of the movie so he was really happy when he saw the finished product. “I’m happy with the outcome of the movie. I was there during the process, I was there during the shoots and stuff so masaya ‘yung feeling. Parang feeling ko parte na ako ng staff. Feeling ko nandoon na ako, part of the team so it feels good to see the whole movie put together already,” he said.
When asked if he is aware that he looks like his dad in some parts of the movie, Inigo joked, “Si papa, siya ‘yung anak ko actually, ako ‘yung tatay.” He also said, “Palagi akong nagjojoke around kasi every time he has scenes like that, every time he wears a hat or shades or whatever to make him look younger, I’m just like, ‘man, how do you do it?’”
Meanwhile, Inigo also talked about frequently posting updates about himself with Piolo on the messaging application Snapchat. According to him, his free time allows him to visit his dad at work often, “Yes, kasi right now, I’m not doing a lot of (things) so what I do is I visit my dad on the set so I’m basically his P.A. (personal assistant) on the set.”
Celebrity