Angelica Panganiban says that moving on always starts with a decision to do so. 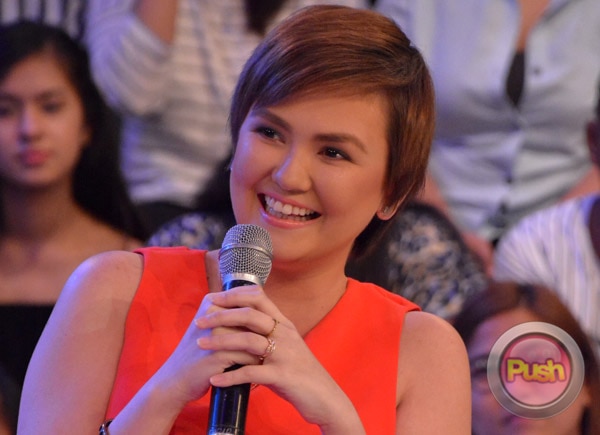 After her appearance on Gandang Gabi Vice over the weekend, Hugot Queen Angelica Panganiban’s “hugots” seem to have a different meaning now. By now those following their hugot segment on their gag show Banana Sundae know that there is a grain of truth behind all her lines.
On GGV, Angelica pretty much laid down the “basic rules” of how a woman can rise from a debilitating breakup, which is pretty much what happened to her recently.
1. Acknowledge where you are in the process
Host Vice Ganda asked Angelica how she was moving on from her breakup with John Lloyd Cruz. It gave a glimpse of the best first step in the entire moving on process.
It is always good to be able to identify at what stage you are in the process because it allows one to know how far you are from the “finish line” or how much “progress” you have made, so to speak. In Angelica’s case, she was honest enough to admit that she is “kinda, super okay” but that she has not fully recovered yet.


2. Happiness should come from within
One of the primary reasons why people tend to lose it whenever they part ways with their significant others is because, once in a relationship, they tend to anchor their happiness to their partners.
According to Angelica, that was a big no-no because it leaves one hollow once that person, where their happiness rests, leaves.
As Angelica aptly puts it, “Hindi mo pwedeng idepend ang happiness mo sa ibang tao.”


3. Remember the good times more than the bad times
Instead of allowing the bitterness and sadness to envelop you after a split, try to counter the feeling by opting to relive the brighter days. Sure, the breakup was heartbreaking, but, according to Angelica, such had been the case because there was a great love and great happiness in the relationship in the first place.
“Kasi kung babalikan niyo, bakit ka magiging bitter ‘di ba, kung mas maraming beses ka naman naging masaya dun sa taong ‘yun. Walang katumbas ‘yung sayang ‘yun sa nangyaring paghihiwalay ninyo,” she said.
4. Slowly detach from the past
While she admitted that she deliberately opted not to visit the places where they previously spent time together, Angelica said she got advice that countered her style.
“May nagsabi kasi sa akin na dapat daw dahan-dahan puntahan ko yung mga yun kasi kung hindi wala akong mapupuntahan, kawawa naman ako,” she said jokingly.
But the key take away here is take it step by step. Sure it would be hard but you have to face the fact that all the places, things and memories that you had together will probably be there for eternity. Unless you decide to drop everything and leave for another country, there is always that chance that you would encounter something or someone that is related to your former significant other.

5. Never lose your self-respect
Of the many things that Angelica said, it was probably the pivotal point in her journey to moving on that deserves to be highlighted. Not only was her anecdote moving and cinematic, it was also very enlightening as well.
At the end of the day, moving on starts with a decision. It could be a decision to finally stop crying or a decision to finally accept and forgive the person who hurt you. But the point is that the person who has been wallowing in sadness should first be firm enough to decide to snap out of her sorry state before she can actually start moving on.
“Kasi hindi ako nag-o-open up sa kaibigan ko, sa pamilya ko ganyan. So nung nakita ko yung sarili ko na ganun, (sabi ko sa sarili ko) huy girl tama na nakakaawa ka na, down na down ka na, bangon,” she recalled.
Celebrity