Tanya Manalang looks forward to performing after her stint on London’s West End. 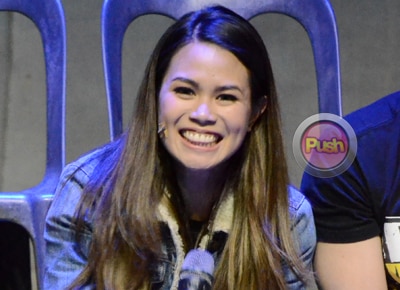 Fresh from her stint playing the lead role of Kim in Miss Saigon at London’s famous West End for the past two years, Tanya Manalang once again conquers the stage in PETA’s Rak of Aegis which she auditioned for when she returned the country. Tanya revealed it was a fellow cast member who helped her audition. "Thank you kay Sheila (Valderrama) Siya yung tumawag sa akin at nagsabi naghahanap daw sila ng Aileen and I was really itching to do something right away so without batting an eyelash I said yes right away. Without thinking twice I said yes,” she shared during the Rak of Aegis press conference held last May 18 at the PETA theater in Quezon city.
Apart from Tanya, other new cast members which were introduced to the media in the show’s newest season include The Voice of the Philippines’ runner-up Alisah Bonaobra, comedian Jon Santos, Ryan Cayabyab singer Vince Lim, and actress Carla Laforteza.
The talented performer said that before she auditioned, she had not been able to watch the musical before she left for London in 2014. "Sadly hindi ko napanuod yung show dahil nung nag-open sila nakaalis na ako. Pero I’ve been hearing great reviews about it and narinig ko rin yung arrangement ng mga kanta, yung stories. Kasi yung ibang friends ko napakalaking fans sila nung show. And nung na-offer sa akin mag-audition to try out for the role of Aileen sabi ko talaga na I really want to even try kasi it’s really different from what I did for the past two years which was Kim for Miss Saigon tapos ito Tagalog pa and mabirit talaga ito. Hindi naman ako talaga biritera. It’s challenging so game ako dun,” she explained.
As one of the four stage actresses alternating the lead role of Aileen, Tanya said she is still in the process of loosening up while working on the original Pinoy musical. "Actually feeling ko nga minsan masyado akong seryoso eh. I think I need to loosen up more. I need to stop being so uptight all the time, ganun,” she added.
A graduate of Media Production from the Assumption college in Makati, Tanya said she was happy to join PETA in her first Tagalog production because it reunited her with Rak of Aegis playwright Liza Magtoto. “One more thing, I have to mention this, Si Ms. Liza Magtoto was my college professor in Assumption. I was in her scriptwriting class and I had a good grade there. In fairness. So gusto ko rin (siya) makatrabaho,” she admitted.
PETA’s original Filipino musical Rak of Aegis which features songs from the iconic band Aegis such as “Luha,” “Halik,” and “Basang Basa sa Ulan” is set to run from June 17 to August 28, 2016. Tickets are available at www.ticketworld.com.ph. For more information, contact PETA at 725-6244, 0917-5391112 or email petatheater@gmail.com
Celebrity